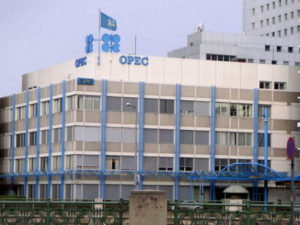 A spat between the International Energy Agency and a global cartel of fossil producers is breaking out into the open, with the Organization of Petroleum Exporting Countries and its allies accusing the IEA of giving too much credence to the climate emergency and purveying biased data.

OPEC+ “will no longer use oil data from the International Energy Agency to assess compliance with production quotas amid a deepening rift between the two institutions,” Bloomberg reports. At a meeting last Wednesday, an OPEC+ technical committee resolved “to replace the IEA’s numbers amid concerns that the reliability of the agency’s overall data is being undermined by its views on climate change and lack of political neutrality, according to delegates.”

OPEC was established in the early 1970s and began as a formidable tool to control and drive up global oil prices. Its current membership includes Algeria, Angola, Congo, Equatorial Guinea, Gabon, Iran, Iraq, Kuwait, Libya, Nigeria, Saudi Arabia, the United Arab Emirates, and Venezuela. Russia is the most prominent of a list of 10 countries in the wider OPEC+ group, which also includes Azerbaijan, Bahrain, Brunei, Kazakhstan, Malaysia, Mexico, Oman, South Sudan, and Sudan.

Last week’s decision by OPEC+ to drop the IEA from its list of data sources “represents the culmination of months of sniping between the IEA, which represents the interests of major energy consumers, and OPEC,” Bloomberg explains. “After working together more closely for several years, the severe energy crisis that’s gripped markets for the past six months and the growing push to curb carbon emissions has made cooperation more difficult.”

The split was deepened by Russia’s invasion of Ukraine, after IEA Director General Fatih Birol criticized OPEC+’s failure to take action that would have kept global oil prices below US$100 per barrel, Bloomberg says. In the weeks leading up to the invasion, Birol was also overt about urging countries like Canada to increase fossil fuel production to replace Russian supplies.

That messaging largely contradicted the results of the net-zero analysis that helped drive OPEC’s hostility toward the Paris-based IEA. “Beyond projects already committed as of 2021, there are no new oil and gas fields approved for development in our pathway, and no new coal mines or mine extensions are required,” the IEA wrote in its landmark net-zero scenario published last May.

“The unwavering policy focus on climate change in the net-zero pathway results in a sharp decline in fossil fuel demand, meaning that the focus for oil and gas producers switches entirely to output—and emissions reductions—from the operation of existing assets.”

It was after that net-zero report that Saudi oil minister Prince Abdulaziz bin Salman wrote off the IEA’s analysis as “La La Land” and warned investors not to bet against Big Oil, while curiously claiming the desert kingdom was no longer an oil-producing country, Bloomberg recalls. “When the long rally in oil prices began last year, OPEC+ ministers threw the blame back at the agency, claiming it had been discouraging investment in vital resources,” the news agency writes.

OPEC+, which had been using IEA oil data as one of six sources to assess how closely its members adhered to production quotas, said it would work with data from private analysts Wood Mackenzie and Rystad instead. The IEA responded that it would “now make its OPEC+ data publicly available, in order to support market transparency,” Bloomberg says.