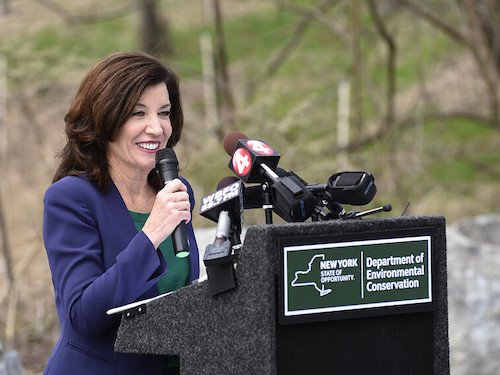 A new multi-state consortium led by New York is forming partnerships with a group of 40 clean power companies, utilities, and universities to curb emissions by developing a regional clean energy hydrogen hub.

The partnership can help New York meet some of its climate commitments, including a directive announced by Hochul in her 2022 State of the State address to make New York a green hydrogen hub, reports Bloomberg Green.

Joining New York in the agreement are the states of Connecticut, Massachusetts, and New Jersey. The consortium will be making its bid for a share of the US$8 billion in federal funding earmarked for four hydrogen hubs across the country.

“By forming this partnership, New York presents a coordinated, multi-state approach to a hydrogen hub that connects the entire value chain of hydrogen producers, users, technology, and equipment manufacturers, and the research and development community including national labs and universities,” Hochul said.

Hydrogen can be produced several different ways, and the different processes have important implications for the fuel’s climate impact. Blue hydrogen is stripped from natural gas with steam and produces carbon dioxide as a byproduct. Because this process both generates emissions and relies on continued natural gas extraction, climate advocates see it as a false solution for the climate crisis.

But the New York partnership’s focus is on green hydrogen, produced by using electrolysis to split hydrogen atoms from water without burning fossil fuels. That means the agreement can help the participating states meet their emission reduction targets.

“With our partners, New York State is positioning the region as a leader in the development of green hydrogen with a vision for how to provide a significant part of the national hydrogen infrastructure network,” said New York State Energy Research and Development Authority President and CEO Doreen Harris, “while delivering benefits to vulnerable and disadvantaged communities by displacing local fossil fuel generation and creating clean energy job opportunities.”