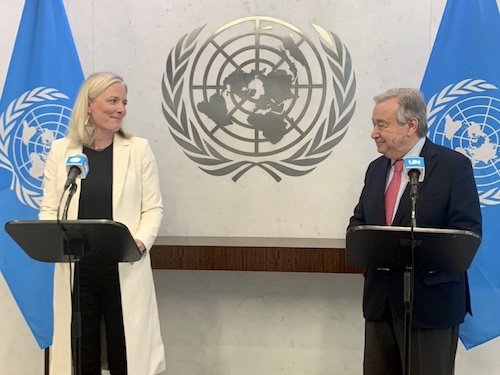 The United Nations has tapped former Canadian environment and climate minister Catherine McKenna to lead an expert group on how to separate substance from spin in the net-zero commitments from businesses and sub-national governments.

The 16-member group will have a year “to publish recommendations on how to judge net-zero commitments and translate them into national and international regulations,” Climate Home News reports. “It will be called the High-Level Expert Group on the Net-Zero Emissions Commitments of Non-State Entities (HLEG) and be supported by a small full-time staff at the UN’s New York headquarters.”

“Ban the UN from naming things. I’m serious,” snarks Climate Home Editor Megan Darby, in the UK-based news site’s excellent weekly newsletter (free subs here). The new committee “has to be a frontrunner for the worst jargon award of 2022,” she added, “which is a shame, because it’s an important initiative. As corporate net-zero pledges proliferate, many of them stretching the ‘net’ to breaking point, there is an urgent need for rigorous, independent standards.”

While the group might not be named “the UN’s anti-greenwash unit,” the “bullshit busters”, or the “net-zero flagbearers”, as Darby tentatively styles it, UN Secretary-General António Guterres still stressed the importance of the effort. G20 countries, in particular, “have the lion’s share of responsibility to achieve net-zero emissions by mid-century,” he said, but “we also urgently need every business, investor, city, state, and region to walk the talk on their net-zero promises.”

That means “bold pledges matched by concrete action,” he added. “Tougher net-zero standards and strengthened accountability around the implementation of these commitments can deliver real and immediate emissions cuts.”

“The recent avalanche of net-zero pledges by businesses, investors, cities, and regions will be vital to keep 1.5°C alive and to build towards a safe and healthy planet,” McKenna said. “But only if all pledges have transparent plans, robust near-term action, and are implemented in full.”

“Governments are being held to account, but for non-state actors the situation is a lot more murky,” added Australian climate scientist and campaigner Bill Hare. “Without guidelines, many net-zero claims risk being simply [public relation] campaigns without verification.”

At a media briefing last Thursday, Climate Home asked McKenna whether the group’s focus would include the Scope 3 emissions that result after a product has reached its end user.

“I don’t want to get ahead of the working group but my view is yes,” she replied. “There are some people who want to greenwash, so the more that we can have robust standards, clear standards—including I believe Scope Three—the more that we’re going to be able to be ambitious on climate action and reach the goal of 1.5°C.”

UN special climate advisor Selwyn Hart said the group will be responsible for setting clear standards and definitions, not “naming and shaming individual companies”. But Climate Home says he was critical of companies that set long-term net-zero targets without shorter-term interim goals.

“Under no circumstances can that be credible,” Hart declared.