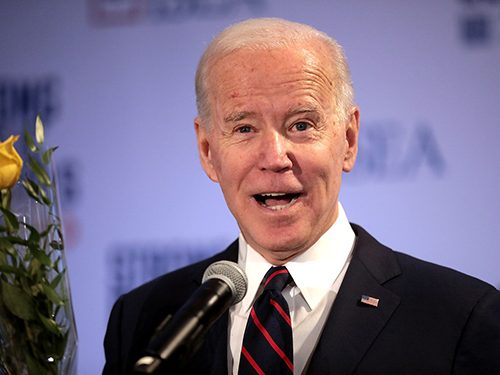 U.S. President Joe Biden brandished one of the biggest weapons in his economic arsenal Thursday in hopes of turning the United States into a leading producer of electric-vehicle batteries and the minerals used to make them.

Biden issued an order under the U.S. Defense Production Act, a powerful procurement tool that dates to the Truman era and the Korean War, to compel the production and processing of critical minerals and rare earth elements, The Canadian Press reports.

“We need to embrace all the tools and technologies to help free us from our dependence on fossil fuels and move us toward a more homegrown clean energy,” he said from the White House. “Technologies made by American companies and American workers, so we can bolster domestic supply chains here at home and export those technologies around the world to reduce greenhouse gases.”

It’s an ambition shared by America’s neighbour to the north, CP says—but one that for Canada will depend heavily on robust U.S. demand in order to succeed.

“It’s a pretty blunt instrument to be using for trying to incentivize domestic production,” said Mark Agnew, vice-president of policy and government relations for the Canadian Chamber of Commerce.

With demand poised to soar, Agnew has been among a chorus of voices lobbying Ottawa in recent months to get serious about energizing production in Canada, which is home to rich reserves of more than 30 different critical minerals.

A series of departmental reviews of U.S. supply chains, ordered by Biden shortly after he took office, included one from the Department of Defense that made clear the U.S. would need the help of “international partners and allies” to ensure a reliable supply of the minerals, which are also vital in a number of military applications.

However, Biden—mindful, perhaps, of the coming midterm elections in November that are widely expected to give Democrats a rough rid—made no mention Thursday of whether the U.S. plans to work with foreign producers.

“There was a pretty meaty section in there that talks about the potential that Canada has and the role that it could play,” Agnew said of the supply chain report.

“The DPA (announcement) doesn’t seem to even give lip service to that, which is concerning.”

Thursday’s announcement was included in a suite of new steps framed as a fresh White House effort to reduce the cost of gasoline, which has been soaring to record levels—especially since the U.S. banned the import of Russian oil and gas.

Indeed, the White House is bending over backwards to deflect blame for the spike back on Russian President Vladimir Putin and his invasion of Ukraine, repeatedly describing it as “Putin’s price hike.”

The administration is putting more pressure on U.S. energy producers to ramp up production, urging Congress to impose “use-it-or-lose-it” fees on wells that are sitting idle instead of helping to ease a shortage that keeps prices high.

Biden is also authorizing the release of a million more barrels a day from the U.S. strategic petroleum reserve over the next six months, the single largest release of oil reserves in history.

Beyond the immediate crisis, building what he called “a Made in America clean energy future” will help safeguard U.S. national security, address climate change, and create secure jobs for future generations, Biden said.

It made for a tricky balancing act, CP writes: reconciling a historic release of oil from U.S. reserves and demands for higher fossil fuel production with a dramatic display of presidential power to foster the growth of electric vehicles.

“Look, the bottom line is this: between ramping up production in the short term and driving down demand in the long term, we can free ourselves from our dependence on imported oil from across the world,” Biden said.

“I know gas prices are painful—I get it. My plan is going to help ease that pain today, and safeguard against tomorrow.”

Canada is not sitting on its hands when it comes to battery production. Last week, automaker Stellantis and South Korean tech giant LG announced plans for a C$5-billion battery plant in Windsor, Ontario, billed as the largest single investment ever in Canada’s auto sector.

But ramping up production and processing of the necessary raw materials is a labour-intensive exercise that takes time to bring on stream, said Brendan Sweeney, managing director of the Trillium Network for Advanced Manufacturing in London.

“There’s a public recognition—from Quebec first, the federal government second, and the province of Ontario very recently—that we’ve got the start of a plan to get these things out of the ground and to customers,” Sweeney said. “The two things that are going to be the bottleneck for this decade are going to be labour and getting things like lithium out to customers.”

Canada has vowed that critical mineral production within its borders will adhere to modern-day environmental and labour standards—a stipulation that is likely to slow production compared to less climate-conscious producers like China, but makes the finished product more politically palatable to a customer like the U.S.

“It’s a very, very, very important process,” but “it takes a long time—it’s not easy,” Sweeney told CP. “We’re going to need some time to actually do this if we want to do it properly.”

This report by The Canadian Press was first published March 31, 2022.