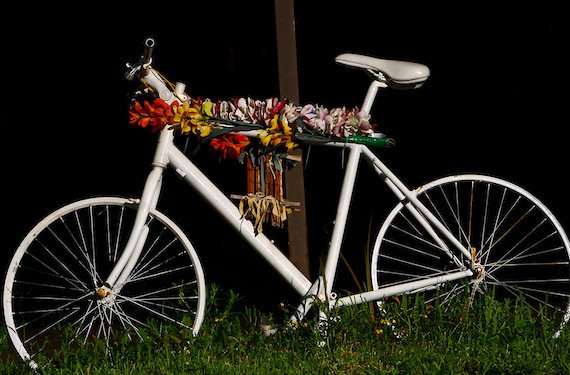 The death of an Ottawa cyclist struck by a snow grader turning right at a busy and dangerous four-way intersection has renewed calls for the city to invest in infrastructure that keeps pedestrians and cyclists safe.

The death of the 43-year-old woman “is a direct consequence of our longstanding choice to favour driver convenience at the expense of pedestrian and cyclist safety,” writes Ottawa writer Brigitte Pellerin, in a recent op-ed for the Ottawa Citizen.

“Alive, she could have been any one of us. In death, she is all of us,” Pellerin adds, urging policy-makers and the public to recognize that it takes much more than fluorescent green paint to keep people safe.

“The best time to invest the small sums necessary to make pathways and connections safe for active road users was 20 years ago. The next best time is right now.”

That particular intersection, like many others in Ottawa, “is known to be especially dangerous for pedestrians and cyclists,” Pellerin explains, having only a four-way stop to control frequently heavy and fast traffic, especially during rush hour. The dead cyclist, who has not yet been identified, was riding through the intersection at around 5:00 PM.

It all comes down to street design changes—and political will. As they stand, our roads are designed “to maximize motorists’ comfort and convenience and nothing else,” and “this is what needs changing,” Pellerin writes. “We have people on staff who know how. And it’s not even expensive.”

And much safer streets can also be created quickly. While “the gold standard is fully segregated lanes,” which do take time to install, “immediate measures include flex stakes and lots of them, protected and elevated crossings, reduced speed limits, automatic speed enforcement (cameras), and speed bumps.”

“In some places, closing a portion of a road to motor vehicles might be the most effective option.”

It all comes down to priorities, writes Pellerin, citing a Twitter comment on the recent tragedy by city councillor and mayoral candidate Catherine McKenney: “For a fraction of the cost, we could make our streets safer for you and your kids to walk or bike or drive. Instead, we invest 100s of millions in widening roads that make everything more precarious for you & your kids. Remember this: budgets = priorities.”