India’s 2070 Net-Zero Goal is Fit to the Challenges it Faces, Experts Say 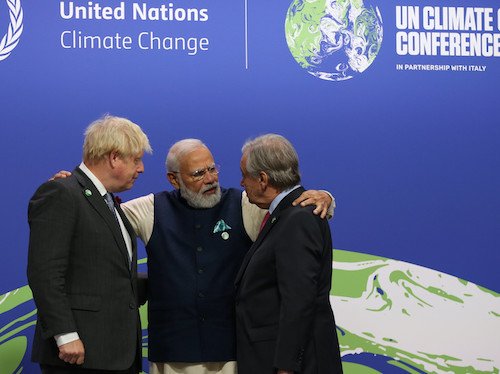 India is an historically low contributor to climate change but is projected to suffer some of global warming’s worst impacts through drought, heat waves, and resulting crop failures. The country’s developing infrastructure still relies on fossil fuels, and significant cuts to emissions ahead of the 2070 climate timeline “could leave millions of Indians struggling for access to basic staples, including the delivery of more air conditioning to a nation that’s extremely vulnerable to heat waves,” writes Bloomberg.

“In fact, India’s challenges maintaining its fragile electric grid under the ever-increasing demand fueled by warming temperatures is a matter of life and death,” adds Bloomberg.

Prime Minister Narendra Modi has called for international funding to help India advance its climate agenda, estimating that the country will need $1 trillion to meet its 2070 target. But developed countries and investors have yet to step up, and given their ‘breathtaking’ lack of commitment to their own US$100-billion climate finance pledge, it is unlikely Modi’s request will be met.

“No one has come forward with constructive offers of support to help India meet its climate goals,” said Kanika Chawla, program manager at UN Energy, which coordinates energy-related issues across the organization.

That means the country will have to rely on “homegrown tools that have lowered energy consumption and the cost of living for millions of its people,” Bloomberg writes.

Renewable energy technology can play an important role alongside energy efficiency toward stabilizing the country’s power grid. As a net importer of crude oil, India is vulnerable to price shocks in the global market, like those resulting from the Russian invasion of Ukraine, writes the Institute for Energy Economics and Financial Analysis (IEEFA).

The volatility of global oil prices could also drive investment into clean energy technologies like green hydrogen, filling the gap left by the lack of international support, he said. “India is on the right path, but we need to accelerate the energy transition now. The building blocks for a low-emissions future are being put in place.”