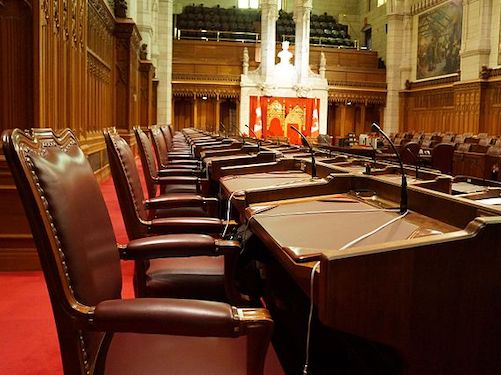 Federal financial institutions and federally-regulated entities would have to line up their investment activities with Canada’s climate commitments under Bill S-243, the Climate-Aligned Finance Act introduced in Senate yesterday by Sen. Rosa Galvez (ISG-Quebec).

“We must face the elephant in the room: our financial system continues to fund activities that fuel climate risk,” Galvez said in a release yesterday. “Canadians are asking for legislative solutions that will help accelerate the transition and achieve our targets. The only scenario in which our financial sector will thrive and prosper for generations to come is the one where we pursue a coherent and orderly transition.”

The legislation would make fulfillment of Canada’s climate commitments a matter of “superseding economic and public interest” for the financial sector, Galvez said in an interview this week. It would:

• Require the federal Office of the Superintendent of Financial Institutions (OSFI) to roll climate targets into its supervisory role;

• Ensure that boards have the climate expertise they need and no conflicts of interest; and

• Base financial institutions’ capital adequacy requirements on the climate risk produced by their business activities.

Those provisions “would guide Canada’s financial sector through an orderly transition to a low-carbon economy” while “safeguarding the financial system from the systemic risks posed by climate change,” the release states. A white paper released by Galvez’ office says the bill would also make the avoidance of carbon lock-in a factor in every financial decision, and require targets and planning that comply with a global carbon budget, consistent with the goals in the Paris climate agreement.

While the finance sector initially tried to address climate risk with voluntary measures, those efforts “have unfortunately not succeeded in unravelling the vicious cycle in which financial systems are trapped,” the white paper states. “Indeed, investments in emissions-intensive sectors contribute to climate impacts that, due to their cumulative, irreversible, and radically uncertain nature, present a threat to the stability of the financial system.”

A key goal of the legislation is to address the disconnect between financial institutions’ net-zero pronouncements and their continuing, lavish investments in fossil fuels and other high-carbon industries. Galvez’ briefing materials for the bill include details on Canadian banks’ fossil investments since the Paris agreement was signed in 2016, including $208.2 billion from the Royal Bank of Canada, $157.5 billion from TD Bank, $148 billion from Scotiabank, and $126.4 billion from the Bank of Montreal.

“One of the gaps we identified in our consultations was that people making very important financial decisions don’t have climate expertise on their boards,” Galvez told The Energy Mix. What many of them do have, on the other hand, is flagrant conflicts of interest.

“It’s just a big family,” she said. “I’ve heard that you could put the 500 people who sit on the most important boards in Canada in one room, and 80% of them would have direct or indirect relationships with the fossil fuel industry. So it isn’t working, and one of the reasons is that the financial sector has obstacles and barriers to correct.”

Galvez, an environmental engineer who previously headed the Department of Civil Engineering and Water Engineering at Laval University, said she expected tough scrutiny and multiple amendments to the bill. She gave it 50-50 odds of becoming law, adding that she hoped to see it clear the Senate and move on to the House of Commons for consideration by the end of this year.

“We know it’s bold. It’s complex. But we need to have this conversation,” she said. “We have to go far, far beyond voluntary disclosure of climate risk. We know the transition is here. We know it’s inevitable. We know that the window for action is closing. So we must act.”

She added that some other senators are giving the bill serious consideration.

“I’ve talked to some of my colleagues who are bankers, or who work in the investment field, and to be honest they’ve all said, ‘you’re right. These are the gaps. We have to solve these issues’,” Galvez said. “Nobody has told me the banks aren’t ready for this.” And insurance companies “are very much aligned with what we’re saying” after facing the financial costs of climate disasters.

“The commentary we’ve heard so far is that this is very rational, the approach is elegant, strategic, and complete,” she said. And with the stability brought on by the three-year Supply and Confidence Agreement announced by the Liberals and New Democrats earlier this week, “I’m hopeful that we can have a robust discussion on the contents of this bill and the amendments.”