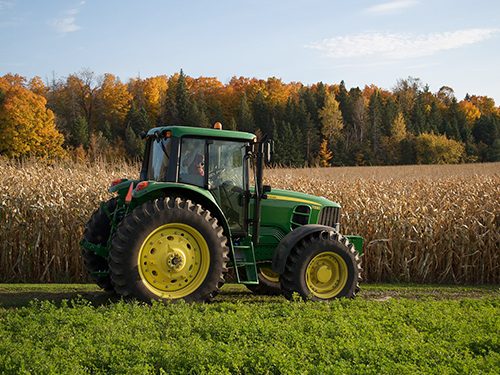 Lower-emitting farm techniques can be part of the solution to the threat of food shortages and rising prices brought on by Russia’s invasion of Ukraine, a Quebec agronomist says

“A crucial portion of the world’s wheat, corn, and barley is trapped in Russia and Ukraine because of the war, while an even larger portion of the world’s fertilizers is stuck in Russia and Belarus,” the New York Times reports. “The result is that global food and fertilizer prices are soaring,” prompting aid organizations, governments, and economists to predict a rise in world hunger.

In the month since Vladimir Putin sent his troops over the border with Ukraine, wheat prices are up by 21%, barley by 33%, and some types of fertilizer by 40%, the Times says. Those price shocks come on top of price and supply problems brought on by the COVID-19 pandemic, shipping bottlenecks, the high cost of fossil energy, and the uptick in climate-related conditions like drought, floods, and wildfires

“Ukraine has only compounded a catastrophe on top of a catastrophe,” said World Food Program Executive Director David Beasley. “There is no precedent even close to this since World War II.”

Within days of the invasion, the world’s biggest fertilizer company, Saskatoon-based Nutrien, was warning that a prolonged conflict and the resulting economic sanctions could hinder natural gas, potash, and nitrogen exports from Russia, and potash sales from Belarus.

The two countries are the world’s second- and third-biggest sources potash producers, accounting for nearly 15 million tonnes between them in 2020. Saskatchewan, easily securing Canada’s spot as world leader, accounted for 14 million tonnes all on its own.

But Nutrien, a US$44-billion company formed in 2018 in a merger between the Potash Corporation of Saskatchewan and Agrium, warned the war could lead to supply problems and higher prices—not just for potash, but for wheat, corn, and vegetable oil. It’s considering expanding its own potash production beyond the record output it was already planning this year, Reuters reported March 1, and warning of supply interruptions for nitrogen—of which it’s the world’s third-largest producer.

“We’re going to run our plants, run them flat out,” said interim CEO Ken Seitz. “Could we see interruptions in exports out of Russia? Yes. Can we see plant closures? We could.”

But with nutrient supply and cost problems are on the horizon, there are steps farmers can take to cushion the impact, said Jacques Nault, vice-president, agronomy at Châteauguay-based Logiag. Some of those options focus on nitrogen fertilizers responsible for the farm sector’s rising emissions of nitrous oxide, a greenhouse gas that is 300 times as potent as carbon dioxide. They include:

“I understand the problems of distribution and distance, but a crisis like this one opens up opportunities that have not been seized before,” Nault told The Energy Mix and Quebec Farmers’ Advocate in an email. “All of this is also consistent with greenhouse gas emission reductions and increases in soil organic carbon,” at which point the tonnes of CO2 reductions “become a farm’s new product and a new source of revenue.”

So far, those alternatives have been emerging at a snail’s pace. But “none of this is rocket science,” Nault wrote. “If financial incentives are there to mitigate farmers’ risks and open the door to a better future, it could be like a landslide.”

Darren Qualman, climate policy and action director at the National Farmers’ Union, said the crisis brought on by Putin’s war points to a “larger resilience issue” for the farm sector.

While the war gives farmers one more reason to rethink their practices, “we have reason after reason,” Qualman added. “This is just one more in a long, long list of reasons to be much more careful with these very precious and biologically powerful agents in the biosphere.”

Only a Handful of UK MPs Support Fracking in Their Constituencies, Poll Reveals