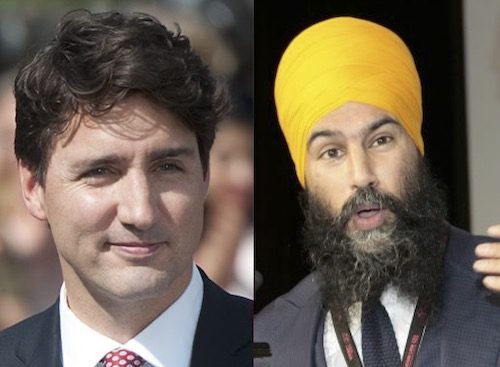 The federal Liberals and New Democrats must make good use of the next three-plus years of political stability by embracing more decisive climate action than they promised in the supply and confidence agreement (SCA) unveiled yesterday, leading climate policy analysts have told The Energy Mix.

Under the agreement, jointly announced by the Prime Minister’s Office and NDP headquarters, the New Democrats agree to support the minority Trudeau government through four federal budgets until the House of Commons shuts down for the summer in June, 2025.

“We have agreed to work together during the course of this Parliament to put the needs of Canadians first,” the two parties state. “This work will be focused on growing our economy by creating green jobs that fight the climate crisis, making people’s lives more affordable with housing and child care, and expanding and protecting our health care. As the basis for this work, it is fundamental for the parties to advance reconciliation with Indigenous peoples. Both parties hope that by approaching this Parliament more collaboratively, we will be able to deliver on these shared policy objectives before the next election.”

To make that happen, “the agreement will mean that the NDP agrees to support the government on confidence and budgetary matters—notably on budgetary policy, budget implementation bills, estimates and supply—and that the Liberal Party commits to govern for the duration of the agreement,” the parties say.

The agreement lists “tackling the climate crisis and creating good paying jobs” third among seven shared priorities, after a raft of high-profile health care commitments and promises to make life more affordable for Canadians. But climate hawks caution that the items in the climate section aren’t terribly specific, and they don’t commit the governing Liberals to anything more than they’d already promised to get done in office.

The five items include:

• Measures to “achieve significant emissions reductions by 2030 compared to 2005 levels” and “further accelerate the trajectory” to net-zero emissions by 2050;

• “Early moves” this year to develop a phaseout plan for public financing of fossil fuels, including by Crown corporations;

• Steps this year on home energy efficiency programs “that both enhance energy affordability for Canadians and reduce emissions, with investments to support multiple streams including low-income and multi-unit residential apartments.”

Several close observers of federal climate policy welcomed the three years to get more ambitious climate policies and regulations firmly in place, with no federal election on the horizon, but said there wasn’t much new in the two parties’ specific climate commitments.

The very existence of the agreement delivers “the promise of parliamentary stability at a critical time in policy development,” over a two- to three-year span when “a lot of new regulations must be drafted and finalized: zero-emission vehicle standards, clean electricity standard, methane regulations, oil and gas cap,” University of British Columbia political scientist Kathryn Harrison said in an email. “And budgets, now with NDP support, will need to reinforce Canada’s goals with spending on things like transition, consumer incentives, and building retrofits.”

But “I’m struck that climate appear in this CSA after pharmacare, dental care, long-term care, housing, child care,” she wrote in a series of tweets. “Yes, important too, but in 2021 600+ died alone in extreme heat, the West burned, B.C. flooded. IPCC delivered a “code red” for humanity. Nothing new on climate here.”

Harrison tweeted that it’s “disappointing that climate apparently wasn’t a higher priority for the NDP,” and “downright bizarre that CSA refers to ‘significant emissions reductions by 2030’ rather than Canada’s actual #ParisAgreement target of 40 to 45%. It’s baked into law anyway, so why is the target missing? This is strange and vaguely worrying. Did negotiators not know the number?”

Climate Emergency Unit Strategy Director Seth Klein agreed the climate provisions in the confidence and supply agreement “simply require that the Liberals do what they’d already promised”, during three years that will be “defining, make it or break it years for climate.” Having that time “to actually implement a climate plan is not to be scoffed at,” he said. “That’s worth something. But there’s nothing new here that actually presses them to do more, that forces them to do more than they purportedly were already planning to do.”

The experience with a similar agreement in British Columbia, between the provincial New Democrats and Greens, delivered two lessons, Klein added: that the language and details in an agreement have to be very specific, and the dominant party can break the deal if it feels it can win a majority government. “The dominant party will fully avail themselves of any wiggle room within the agreement,” he warned. And in this deal, “I don’t see a lot of specifics, especially on climate.”

And despite the two parties’ promises on dental care and pharmacare, there’s “not enough in this agreement on tackling inequality,” Klein said. “When you come to speak to the deep fears, some of which we saw expressed in this convoy, that the system is rigged, that the Liberals are elitist, I’m worried that there’s not enough here to push back against a right wing populist backlash.”

Caroline Brouillette, national policy manager at Climate Action Network-Canada, called it “a little underwhelming to see the text of the agreement just reiterate existing government promises and commit to speeding up their implementation.”

But she recalled that climate groups had run a “no more delays” campaign urging the federal parties to put aside their differences to address the climate emergency and embrace a just transition, so “in this divided political environment, it’s good to see the parties work together.”

The key question, Brouillette said, “is how the NDP is going to leverage its new seat closer to power to increase the speed and scale of government climate action and ambition.” She said she would have preferred to see a “big, flagship NDP addition” to the climate section of the agreement, adding tools to the climate action toolbox beyond the market mechanisms the Trudeau Liberals have emphasized up to now.

“With increasingly destructive climate impacts and a short and rapidly-closing window to set the world on track for a climate-safe future, business as usual is not enough,” she added in a release. “The adoption of this agreement shows that leaders can put partisanship aside and think outside the box—now, they must apply the same spirit to the climate crisis.”

350 Canada declared the deal “big news” in a mid-day alert to supporters, putting the country “closer than ever to winning a Just Transition Act”. But Canada Campaigns Director Amara Possian said the agreement’s vague reference to “significant emissions reductions” is out of line with climate science and “opens the door to Big Oil lobbying to further weaken climate policy in Canada.”

Those gaps are “just another reminder of how much the climate movement still has to do to win the kind of climate policy we really need,” Possian said in an email. “A four-year span between elections should mean that the government has the stability to be bold and ambitious when it comes to climate policy,” so “for advocates, it means our job is to force them to do just that.”

Julia Levin, senior program manager, climate and energy at Environmental Defence Canada, said it’s a continuing concern that neither of the parties has a just transition plan in place. “The energy transition is already happening, and communities and workers in Canada deserve a well-funded plan to make sure they aren’t left behind,” she told The Mix.

“Climate has to be a key part of how we understand the need to make peoples’ lives better,” but climate is one of the sections of the agreement “where we don’t actually have more ambition than was on the table before,” Levin said. “Since we’re still not living up to the urgency of the crisis, that needs to change.”

With Russia’s war in Ukraine entering its second month, Klein pointed to another risk in the Liberal-NDP deal. “There’s nothing in this agreement that speaks to spending on climate,” he said. But by agreeing to support the next four federal budgets, the NDP may be opening the door to a “huge increase” in the military budget if the Trudeau government goes along with NATO’s demand to increase spending to 2% of GDP.

The Globe and Mail says the NDP “won’t stand in the way” of a major military spending increase in this year’s federal budget “as long as Prime Minister Justin Trudeau approves billions of dollars in new social programs”.

“It’s not something I would support,” Klein said. “It’s not something that theoretically the NDP supports, except that they just agreed to support every budget for next four years.” That’s a climate issue because “all spending decisions have opportunity costs, and it would be tragic that we would deploy our resources that way instead of against the real security threat” posed by the climate emergency.

Destination Zero Executive Director Catherine Abreu said a fairer tax system at this moment in history “might include a windfall profits tax on oil and gas companies to help Canadians grapple with soaring gas prices,” at a time when U.S. Democrats are proposing exactly that. She said she was surprised “not to see any mention of energy transition in this agreement, particularly given how volatile the geopolitics of energy are at the moment.”

Earlier this week, the NDP tabled a motion in the House of Commons that called for a windfall profits tax on fossil companies, grocery chains, and big box stores, the Globe and Mail reported. But that idea doesn’t seem to have filtered into a confidence and supply agreement that does not contain the words “oil” or “gas”.

Marc Lee, senior economist at the Canadian Centre for Policy Alternatives, called for a windfall tax on “surging gasoline prices” in a policy note just five days before the Liberal-NDP announcement. Yesterday, he said the agreement positions the New Democrats to support a federal budget that will likely include a new fossil fuel subsidy, in the form of a generous tax credit for carbon capture, utilization and storage technology.

Yet a windfall profits tax “would satisfy a bunch of the main underlying planks to the confidence and supply agreement: making life more affordable, sticking to it in terms of climate action and fossil fuel phaseout and fair taxation,” he said. “From an economics point of view, it’s actually the best possible way to tax anything, because it’s a pure windfall. It’s not distorting any decisions in the economy. It’s deliberately taking it from people who are gouging consumers to the tune of billions of dollars every year. So why not?”