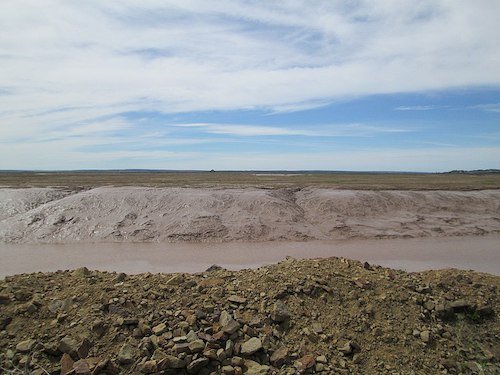 A Halifax professor is disappointed with a report that recommends more and higher dikes to prevent rising seas from flooding the low-lying strip of land that connects Nova Scotia to mainland Canada, as it leaves out the cheaper, more sustainable “soft” option of indigenous saltwater marshes.

Extreme weather and rising sea levels caused by climate change threaten to flood the Chignecto Isthmus by the year 2100, reports CBC News, cutting off a critical rail line and a stretch of the Trans-Canada Highway that allow for an estimated C$35 billion in trade each year.

Authors of the $700,000 report paid for jointly by Ottawa, Nova Scotia, and New Brunswick offered three options, all focusing on the “hard” engineering solution of dike-building: raising existing dikes at a cost of $200.2 million, building new ones, which would cost $189.2 million, or raising existing dikes plus strategically located reinforcement by “steel sheet pile walls” for $300.8 million. All three options have estimated timelines of about 10 years.

The report authors asked to look at protecting critical infrastructure, and were not explicitly directed to consider the well-being of Chignecto communities like Sackville, NB and Amherst, NS. But local officials said they are satisfied the recommendations will protect people, homes, and livelihoods.

A recent Green Resilience workshop in Sackville affirmed that the need for such protections is very high.

CBC writes that federal and official decision-makers are currently weighing the options and hammering out a cost-sharing agreement.

While she agreed with the need to strengthen the dike system, Danika Van Proosdij, professor of coastal geomorphology at St. Mary’s University in Halifax, said she was disappointed to see the report dismiss the supplementary use of saltwater marshland buffers.

Citing her own work as a research lead on a project called Making Room for Wetlands, Van Proosdij said she would press authorities to rethink this “soft” flood mitigation option. In addition to helping prevent the erosion that can come with the “hard” engineering of dikes and seawalls, and encouraging biodiversity, saltwater marshes reduce costs, providing a buffer that allows dikes to be built farther back and lower, she said.

But CBC says officials considered and rejected that option.

Cities Must Use Their Authority for Bold Climate Action, Miller Says