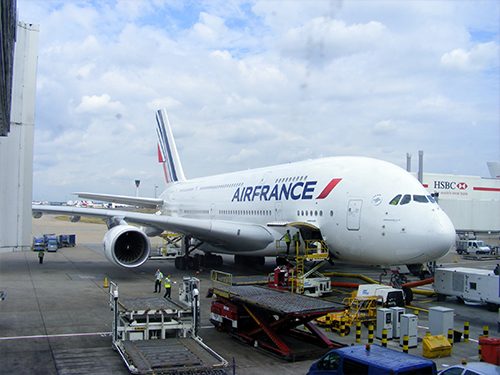 Flying less is currently the only path to rapid reduction in aviation emissions, and will remain so for longer than necessary if the aviation industry fails to grasp that its survival depends on embracing climate-friendly technological innovation, a veteran climate and aviation analyst warns.

While the European Union’s ongoing legislative effort to tackle aviation’s “mammoth climate problem” through better pricing of emissions and the development of alternative fuels is “an historic step towards getting to the root of the problem,” flying less remains the only way to rapidly reduce emissions, writes Andrew Murphy, aviation director at the clean mobility NGO Transport and Environment, in a recent op-ed for Euractiv.

“Even with the best will in the world, sustainable fuels will take time to be scaled up,” writes Murphy. And in the meantime, airlines may start “filling up with unsustainable animal fats, crop biofuels, and fraudulent used cooking oil.”

But “production of the most promising alternative fuels based on renewable electricity, known as e-kerosene, will only scale up towards the end of this decade,” he adds.

That leaves demand management as the priority out to 2030, according to T&E’s roadmap to climate neutral aviation.

This strategy contains one very large low-hanging fruit. “1% of the global population is responsible for 50% of emissions from flying, and a big share of this, about 30% in Europe, comes from corporate flyers,” writes Murphy.

“A golden window exists right now for top corporate executives to decide to align their travel policy with their climate commitments,” he adds, explaining that a 50% reduction in corporate travel would cut CO2 emissions by as much as 32.6 million tonnes of CO2 by 2030, “equivalent to taking 16 million polluting cars off the road.”

But demand management must take centre stage now because the aviation industry is determined to preserve its climate-wrecking status quo, writes Murphy: “To many of us working in this area, it seems like airlines spent more money opposing climate measures than supporting new technologies.”

Rather than using their recently adopted net-zero pledges as the basis for lobbying for more effective climate measures, many airlines are doing the opposite: “using them as cover to oppose the very measures that are being proposed to reach such a target.”

“We’ll be exposing more of these anti-climate tactics in the near future,” he adds.

But the industry should be jettisoning such “incredibly counterproductive” tactics right now, as they go “against the optimistic findings of our report: that the technology solutions are actually deployable, and can save the industry’s future.”

Instead of undermining climate legislation, such as the EU’s proposed Fit for 55 initiative (emissions cuts of 55% by 2030), the aviation industry should be lobbying for it, while using “their technical expertise to help address complex aspects such as non-CO2 effects and provide clearer timelines for deploying zero emission aircraft.”

The sooner that happens, the sooner remaining earth-bound ceases to be the best option for reining in aviation emissions, Murphy says.

Meanwhile, a recent post in Policy Options counters the notion that carbon offsets should be part of aviation’s climate toolkit. “The global market for carbon offsets is expected to grow up to 50 times by mid-century, driven in part by the implementation of the UN-based Carbon Offsetting and Reduction Scheme for International Aviation (CORSIA),” writes Ryan Katz-Rosene, associate professor in environmental political economy at the University of Ottawa. But he lays out a number of reasons why such a venture stands to become a first-class boondoggle.

High on the list is the fact that “most carbon offsets don’t work,” for the straightforward reason that 20% of the carbon emitted at high altitudes will remain there for millennia. Any carbon offset project worth the name will therefore need to sequester carbon for roughly the equivalent amount of time—a decidedly unlikely event given that most aviation offsets rely upon some form of “biological carbon sequestration, usually in the form of tree planting or forest conservation, which usually fail to keep carbon out of the atmosphere for that long.”

“Last summer’s unprecedented wildfires in the American West,” for example, saw hundreds of thousands of acres of forest protected through carbon offset financing go “up in smoke,” writes Katz-Rosene.

Another strike against carbon offsets: the fact that those whose flights create the most emissions—frequent and corporate flyers or that 1% responsible for 50% of emissions—are the ones most able to absorb the additional costs associated with flight offsets.

Little more than a cheap salve for the conscience, offsets serve only to justify carbon-intensive behaviours “at a time when climate mitigation requires behavioural change across society,” writes Katz-Rosene.