Cities Must Use Their Authority for Bold Climate Action, Miller Says 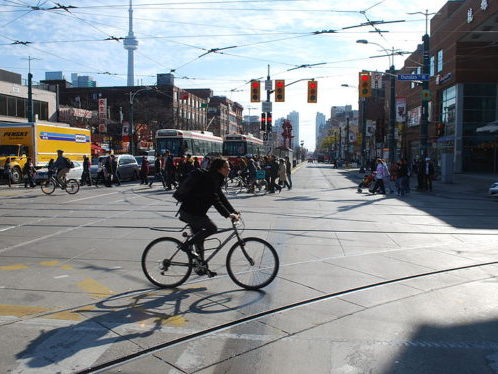 Canadian cities already have the authority to take bold action on climate solutions, and the world’s best municipal climate leaders have shown how other communities can cut their emissions and embrace climate and environmental justice, former Toronto mayor David Miller told an online community meeting in Ottawa Monday evening.

“If we are going to address climate change in a world where national governments, including Canada’s, aren’t doing nearly enough, and if we have eight years to halve emissions, the place it’s going to happen is in cities,” said Miller, now managing director of the C40 Cities Centre for Urban Climate and Economy.

“That’s where the emissions are, that’s where the people are, and that’s where the economy is,” he told the annual meeting of Community Associations for Environmental Sustainability (CAFES) Ottawa. “We already know, and somewhere in the world, we’re already implementing exactly the right kinds of things that get us where we need to go.”

But to hit the big-picture target of cutting global greenhouse gas emissions in half by 2030, it’s “critically important” that citizens push their city councils to “follow the lead of the best cities in the world, and in fact surpass it and challenge other cities to do better.”

Miller pointed to a key Supreme Court of Canada case, affirming Hudson, Quebec’s right to limit cosmetic pesticide use within its boundaries, as a key ruling that entrenched municipalities’ authority to “use their existing powers and push the envelope” on important issues. Crucially, “the standard isn’t whether you’re right, but whether you have a valid public purpose”—a finding that Toronto used while Miller was mayor to enact its first green building bylaw.

Eventually, he said, the city’s development industry bought in to a local rule that went beyond the quality of buildings to address where they’re built, their role in densification and limiting sprawl, and access to transit, walking, and biking.

Cities must also ground their climate plans in a commitment to equity, Miller told participants. In the Toronto plan, neighbourhoods with the highest correlation between low incomes and low investment in public services received priority funding.

“Not only do you have a climate plan that creates a transit plan that is a development plan,” he said. “It is also a way that those who are the least well off can start to benefit from the vibrant life of the city.” He recalled one conversation with a woman in the far-eastern suburb of Scarborough whose regular transit commute to a job at Pearson International Airport took two hours, each way, each day—as long as she made all her connections between two buses and two subway routes.

“That woman can’t participate in the life of the city, because in order to put food on the table she has to transit literally four hours a day,” he said. “That means she might not even be able to have dinner with her family,” or go back to university as a mature student to improve he skills, as Miller said his mother did. “She can’t even go to the community meetings and democratically argue for increased rapid transit in her neighbourhood, because she’s stuck on the bus. So a good climate plan doesn’t just address climate. It addresses the economy, development, transportation, and most of all, it addresses social justice.”

He added that he’s “somewhat optimistic” about success in response to the climate emergency “because the best cities and mayors want to do exactly that.”

Speaking to citizens’ associations in a city that recently expanded its urban boundary despite continuing concerns about the climate crisis, an affordable housing emergency, and sprawl, Miller cited green space and appropriate densification as essential building blocks for a sustainable city. That means “reasonable” density, not 30-storey buildings, he added, with cities using their planning authority to push back on provincial building codes that do not deliver large numbers of affordable family housing units.

Cities must also “think much more about the role of government in owning housing or land, or partnering by owning the land with people like the cooperative movement,” Miller said. “We need to ensure that housing is affordable over the long term. The fact that the land value on your housing goes up so high in city centres needs to be taken out of the equation somewhat.”