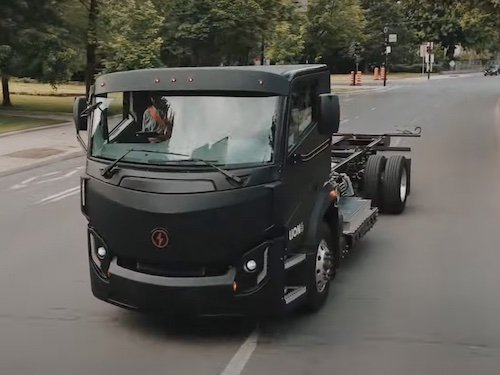 Saint-Jérôme, Quebec-based Lion Electric was on the scene at one of North America’s biggest commercial trucking events in Indiana last week, giving potential customers a chance to test drive three of its new electric truck models.

The event at the Indiana Convention Center “debuted the results of Lion Electric’s partnerships with equipment upfitters Morgan Truck Body, Thermo King, Knapheide, and CM Truck Beds,” Sustainable Biz reports, with the company showing off a zero-emission truck with options for fully electrified refrigerated or dry freight. “With fewer moving parts and preventive maintenance items such as lubricants, filters, belts, and more, Lion trucks offer maintenance savings of up to 60% and energy savings of up to 80%,” the industry newsletter adds.

“The wide variety of upfit components we are debuting at this year’s Work Truck Week is proof that electrification has arrived for a broad range of truck fleet customers, from dry cargo fleets to those with temperature-sensitive requirements,” Lion Chief Commercial Officer Brian Piern said in a statement.

But just a week before the industry trade show, Canadian EV proponents were watching closely to see whether the country would align its own emission regulations with the United States Environmental Protection Agency (EPA), as it traditionally does, or with the more ambitious standards adopted by California and other states. That decision by Environment and Climate Minister Steven Guilbeault could determine whether Canada hits its 2040 deadline to electrify its entire heavy truck fleet, iPolitics reports.

The EPA introduced new limits on nitrogen oxide and carbon dioxide emissions from heavy trucks on March 7, iPolitics says. That was three months after Guilbeault said Canada would match its own regulations to the “most ambitious standards in North America,” and nearly three years after Canada and California signed a memorandum of understanding to cooperate on climate action.

That could be essential, because Clean Energy Canada Senior Policy Advisor Evan Pivnick told iPolitics the new EPA standard won’t deliver the pace of adoption the federal government is looking for.

“We have the EPA coming out with standards that are insufficient for what Canada’s own targets are, and we’ve got a growing group of states who are working together to be far more significant,” Pivnick said. He added that it’s in Canada’s pragmatic interest, as well as a matter of “values”, to align with the tougher standard, given the market clout wielded by California (which likes to call itself the world’s fifth-largest economy) and the states that are following its regulatory lead.

The new EPA standard is under fire in the U.S., as well, with environmental groups saying it doesn’t go far enough to control a major air pollutant, while industry groups warn that rising costs for new trucks will force operators to keep their older, more polluting models on the road, Canary Media reports.

“As if to counter claims that clean truck technology isn’t evolving quickly enough, the Department of Energy released a report on the very same day highlighting the progress of battery-electric and fuel cell electric trucks in reaching cost parity with their diesel-fueled counterparts,” Canary writes. “According to the National Renewable Energy Laboratory study, that target will be reached by 2030 for smaller battery-electric trucks and by 2035 for heavy-duty trucks that travel less than 500 miles a day, while hydrogen fuel cells will become cost-competitive for longer-haul trucks.”

“Four or five years ago, there was a lot of skepticism” that electric trucks could match the cost and range of fossil-fueled vehicles, Michael Berube, deputy assistant secretary for sustainable transportation at DOE’s Office of Energy Efficiency and Renewable Energy, told a webinar earlier this month. “Today that has really flipped around.”

The U.S. DOE release included a “laundry list of the federal funding available to support this transition,” courtesy of a White House fact sheet, Canary Media says. But reporter Jeff St. John points to one remaining gap in the plan. “Not all classes of trucks are as primed to make the switch to electric as others are,” he explains, with the longest-haul trucks that account for 40% of the fleet but 70% of the emissions emerging as the toughest to electrify.

“Because trucking is so varied and diverse, there are going to be use cases where the industry will electrify really fast,” Mike Roeth, executive director of the North American Council for Freight Efficiency, told St. John. “And there are others that will be slower—really slow.”