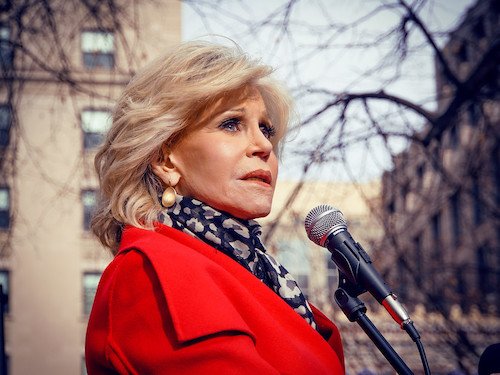 Actor and climate activist Jane Fonda has launched a new political action committee in the United States, vowing to do “whatever it takes to defeat the political allies of the fossil fuel industry, no matter which side of the aisle they’re on.”

“Scientists have been very clear. We have to cut our fossil fuel emissions in half by 2030. We have eight years, that’s just four election cycles before the point of no return,” she said.

“There is no question that the obstacle between saving the planet, and not, is the money that has a stranglehold on our politicians,” Fonda added, pointing out that in 2020 alone Big Oil funnelled US$139 million into the pockets of American politicians, “Republicans and Democrats alike.”

Urging fans to support her Climate PAC, the 84-year-old—who has been arrested five times in recent years during climate protests—declared: “Let’s send a message to the politicians who are bankrolled: ‘you should be as scared for your careers as we are by climate spinning out of our control’.”

This isn’t [Fonda’s] first rodeo in political funding,” notes Grist, describing the Campaign for Economic Democracy PAC that she co-founded with then-husband Tom Hayden in the 1970s.

Funded primarily by $17 million earned from the sale of Fonda’s wildly popular workout videos, that earlier PAC was focused on advancing “a wide variety of progressive causes,” writes Grist, from affordable housing, to solar development, to the fight for clean air and water.

While it remains unclear whether Fonda’s new PAC will be a force in mid-term elections later this year, the new initiative is further proof of the legendarily pugnacious activist’s determination to always “put her money where her mouth is,” Grist says.