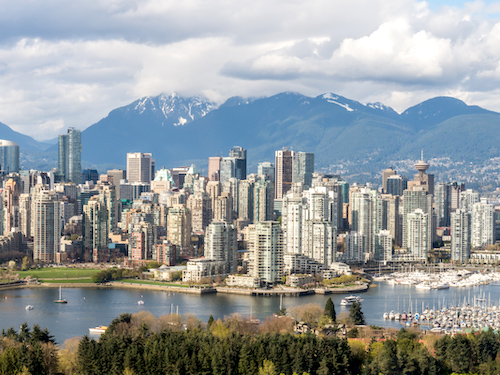 Vancouver and North Vancouver each took top honours in three categories of a citizen-driven sustainability competition where volunteers across Canada tracked municipalities on 31 indicators of a better life for residents—from affordable housing to air quality, from gender equity to bike lanes.

Affordable housing is a “critical factor in the fight against climate change and for climate justice,” says Climate Reality: it’s a basic human right, and when such rights and needs are met, people “are in a much better position to think about long-term goals for themselves and society, exert their power as citizens, and influence decisions related to greenhouse gases.”

North Vancouver won for both sustainable buildings and local agriculture. Heralding North Van as “an inspiration for its sustainable food system, where food is seen as a valuable resource at every stage in the food system,” CRPC says the city secured the win with “approximately 10.6 farmers markets per 100,000 residents”, along with strategies designed to build “an integrated food system based on environmental responsibility and equity.”

North Vancouver also won for sustainable jobs, with one key metric the number of Benefit (B) Corporations—businesses certified for their social and environmental performance—are registered in a municipality. In 2021, North Vancouver had 10.37 B Corps per 100,000 inhabitants, double last year’s total.

Climate Reality found that the city’s 100-Year Sustainability Vision and its Climate and Environment Strategy have been critical in providing companies “with support and incentives to incorporate social responsibility in their practices.”

The Climate Reality Project’s head office city of Montreal won for public transit—as it has since the inception of the NCL standings. Even during the pandemic, ridership remained extremely high, owing in part to a transit network that serves almost every area of the city, and very frequently. CRPC also noted that the board of directors for the Société de Transport de Montreal (STM), includes two representatives of public transit users.

“By encouraging a participative democracy, Montreal enables its citizens to benefit from a well-connected transport system that addresses communities’ needs,” CRPC said.

Kelowna took the crown for bike lanes, with 246 kilometres per 100,000 residents. “With 300 kilometres of on-street bike lanes and 40 kilometres of separated, paved, multi-use paths, and 137,499 inhabitants, Kelowna is well ahead in the standings in the roads indicator.”

In the related category of walkability, Vancouver took top honours, followed by Montreal and Toronto. Calgary placed at the back of the pack.

In stark contrast, the Aamjiwnaang First Nation is located in Ontario’s “Chemical Valley,” said CRPC, so named because it is surrounded by over 50 registered polluting industries. The First Nation suffers levels of benzene pollution, a known carcinogen, that are “44 times the yearly Ambient Air Quality Criteria threshold.”

St. John’s won for urban greenness, Burnaby for landfill waste, Toronto for gender equity, and Vancouver for municipal employees dedicated to the transition. Montreal also took home the prize for energy, with a supply mix consisting of 93% hydropower, with 5% wind, 1% biomass, and 1% nuclear and natural gas.

The standings also flag a participating city’s biggest weakness. Vancouver and Montreal both need to limit air pollution, for example, while Calgary and Kelowna (bike lanes notwithstanding) need to work on greening their streets. Calgary also lags on its energy mix.

To enter a municipality in Climate Reality’s annual NCL standings, ordinary citizens can contact their city councillors and ask them to submit data on the 31 sustainability indicators to an open CRPC database called the Stat Tracker.

The citizen-led process is designed to help members of the public feel involved and empowered, while boosting accountability on the part of elected officials, said CRPC. The ultimate purpose is to “encourage municipalities to reach net-zero by or before 2050, by highlighting local solutions that help improve the lives of Canadians.”

The CRPC is the Canadian branch of the Climate Reality Project, founded in 2006 by Nobel Laureate and former U.S. vice president Al Gore.