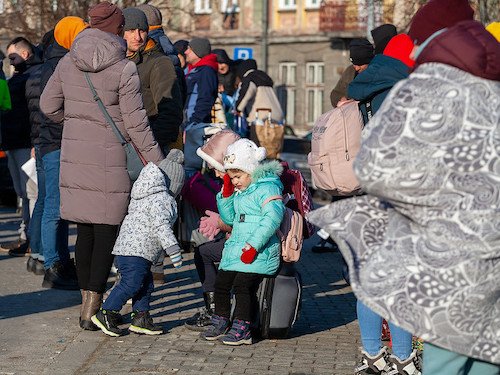 The horrific news from Vladimir Putin’s invasion, coupled with a history of family experience with war, escape, and loss, has a Montreal clean energy executive on a mission to raise $100,000 for emergency relief in Ukraine.

“As a community of professionals, we work every day to build a better future for our planet,” wrote Philippe Dunsky, president of Dunsky Energy + Climate Advisors and co-chair of Efficiency Canada, in a LinkedIn post urging colleagues, clients, and competitors to contribute to Clean Energy Professionals for Ukraine. The post identified several other firms that had already signed on and linked to three potential recipients—the Canada-Ukraine Foundation, Doctors Without Borders, and the Ukraine Emergency Fund at the UN High Commissioner for Refugees Canada.

In a separate post, Dunsky traced the fundraising drive to a feeling of being helpless to act and limited by geography—and motivated by his mother’s experience as the child of Jewish parents who’d managed to flee from Poland to Russia, just in time to escape the worst of the Second World War.

“I grew up hearing the stories: of her parents’ escape; of the summary execution—in villages or in death camps—of their brothers and sisters who didn’t leave on time; of her uncle who stayed to fight with the Resistance; of the Russian labour camps her parents were sent to; of the malnutrition that led her, a toddler growing up in an Austrian refugee camp, to get calcium by literally eating the plaster from broken walls; of their ultimate escape to Canada.”

“I grew up with a single mantra etched into my brain and my heart like no other: ‘NEVER FORGET’,” he wrote in the early days of the war. “And yet, here we are… already two million refugees. Kids who two weeks ago were going to school or playing with friends, are now hiding in WW2-era bunkers, if they’re sheltered at all.”

The firm had raised $25,000 for Clean Energy Professionals for Ukraine by the time the program launched, and Barbieri said a mix of corporate and individual donations had brought the total above $40,000 earlier this week. “We’re going to keep pushing things out on social media and getting in touch with our networks to move the needle even more,” he said.

Research Aims to Use Sunlight to Turn Captured CO2 into Fuel