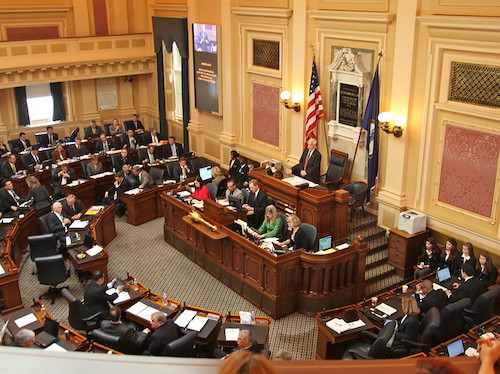 Virginia’s Republican governor is going all out to withdraw from a multi-state carbon reduction initiative, even after the program netted the state US$74.2 million for flood protection and low-income energy efficiency programs.

Despite the financial windfall, Gov. Glenn Youngkin “remains committed to withdrawing the state from the Regional Greenhouse Gas Initiative (RGGI), which he has said has not reduced emissions while imposing unnecessary costs on Virginia electric utility ratepayers,” reports the Virginia Mercury.

Youngkin’s claim about emissions—written in an executive order signed in January to re-evaluate Virginia’s participation in RGGI—flies in the face of latest reports which find the program’s emissions objectives have been met, with states reporting emissions at more than 50% below 2005 levels in 2017.

Youngkin and his fellow Republicans have been trying “a variety of strategies” to remove Virginia from the regional program, the news story states—from the executive order, to tinkering with budget language to prevent RGGI monies from being spent, to angling to repeal the 2020 act authorizing RGGI participation.

Under the new order, the Virginia Department of Environmental Quality was required “to issue a report on the costs and benefits of RGGI participation as well as an emergency regulation rolling back existing rules on the books,” the Mercury writes, adding that while the report and proposed regulation were due February 14, neither has yet been made publicly available.

More than two dozen environmental and energy groups have petitioned budget negotiators to reject Youngkin’s proposed constraints on RGGI, arguing that “these sorts of major policy changes cannot be fully evaluated and studied in the budget process,” the news story states.

So far, the legislation to repeal the RGGI measure has been blocked by state Democrats.

Democrats have also rejected a bid by Virginia utility LS Power to secure a “special carveout in the RGGI law that would let it purchase carbon allowances at a discounted rate,” thereby avoiding some $30 million in damage to its bottom line.

This was the second attempt by LS Power, the Mercury reports, since its push in 2020 for relief from the $50 million in costs it would incur through 2025 after being required to buy carbon allowances through RGGI auctions.

Rejecting LS Power’s request in 2020, the Democrats noted that the utility’s gain would be a significant loss to climate action, and to the programs RGGI was designed to fund.