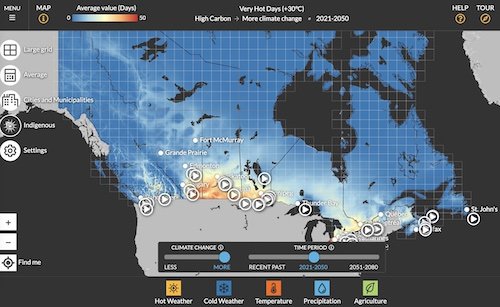 The Climate Atlas of Canada is out with a new Indigenous Knowledges component that captures the climate impacts facing First Nations, Métis, and Inuit communities across the country and the solutions they’ve been putting in place, from land conservation to renewable energy development.

The collection of new map layers, built on top of an atlas that has been online since 2018, “foregrounds First Nations, Inuit, and Métis people and their climate leadership, and also the climate impacts for the diverse Indigenous Peoples of the country,” Ian Mauro, executive director of the Prairie Climate Centre, told a webinar yesterday. With new mapping, video, and interactive content, the updated atlas “brings together Western science and Indigenous wisdom for the first time nationally.”

With yesterday’s release, “we’ve launched a new map of Canada,” Mauro told CBC. “It’s a massive contribution from Indigenous communities to all of Canada… to think about a different way of approaching this hugely complex issue that is grounded in that millennia-old yet current and modern Indigenous wisdom.”

Hetxw’ms Gyetxw (Brett Huson), a member of the Gitxsan Nation in Northwest Interior British Columbia who helped lead the three-year project, said the new mapping site is a place “where we want all communities and all perspectives to be welcome.” He said he’d used his first-hand experience with climate impacts to help the Climate Centre bridge the gap between Indigenous knowledge and Western science.

“We’ve watched the world change,” he told CBC. “I’m going to be 40 this year, but in my lifetime I have watched our land change completely.”

Mauro said the centre had worked with national and regional Indigenous organizations to collect and vet a massive amount of data, including the location of every community across the country and the climate impacts they’re likely to face based on 24 different models for future global warming. For example, the Long Plain First Nation, an Ojibway and Dakota community on Manitoba’s Central Plain, would see the number of days each year over 30°C increase from 14.4 to 52.4 between 1976-2005 and 2051-2080.

But that figure is just based on the average of the available climate models, Mauro added—the actual number of dangerously hot days could be as low as 26, or as high as 77.4. “Think of that for communities, for health, for infrastructure,” he said. “It’s really very serious.”

At the other end of the scale, the number of days below -30°C for the Baffin Island Inuit community of Pangnirtung is set to decrease from 43.2 to just 3.9. “So we think a lot about the loss of the cold, permafrost, infrastructure and buildings built on that permafrost, about roads and runways,” Mauro said.

Métis National Council President Cassidy Caron pointed to the collaboration the Prairie Centre had undertaken “to develop research tools and outreach that better understand and communicate the critically important perspectives, knowledges, and experiences of Métis people regarding conservation and climate change.” She said the project was an opportunity “to really recentre our relationships with ourselves and the land and create the space for our Métis governments, their staff, and our communities to highlight the incredible work they’re doing”—from environmental and water conservation projects, to the Métis Nation’s first community solar project at Green Lake, Saskatchewan.

“It’s all about our relationships, recognizing that we’re all connected to each other and to the land,” Caron added. “Tackling climate change requires all of us to come together and collectively develop and implement solutions.”

Kluane Adamek, Yukon Regional Chief with the Assembly of First Nations and a citizen of the Kluane First Nation, said her community has already seen serious impacts as a result of climate change. “Our lake has gone down by 10 feet in the last 10 years, and what that means for us is changes to where people are ice fishing. Our docks needed to be moved. The places where we used to go aren’t there anymore.”

With the new mapping layers in the Climate Atlas, “now we can plan in a way we’ve never been able to plan before by having access to this information in a really clear way,” Adamek added. She said her grandmother would have been thrilled with that data, after having to navigate major changes in cold and hot days in her own hunting.

Renowned Inuit leader Siila Watt-Cloutier, a Nobel Peace Prize nominee and former chair of the Inuit Circumpolar Council, stressed the “power of our Indigenous knowledge and wisdom that have gone undervalued and under-recognized in a world that knows more about our wildlife than about us, the people.”

Inuit have often been seen as victims of industrialization and colonization, she added, and those impacts have been real—from persistent organic pollutants concentrating in the Arctic, to climate change causing ice loss and glacier melt across the region. “But in reality, the world doesn’t know the brilliance and ingenuity and wisdom” that Inuit can offer as an “incredibly rich resources that could lead the world” to a more sustainable future.

Watt-Cloutier said the Indigenous Knowledges project had brought those perspectives together, “not just in terms of our knowledges, but in terms of that spirit and energy that are now elevated to another level.”