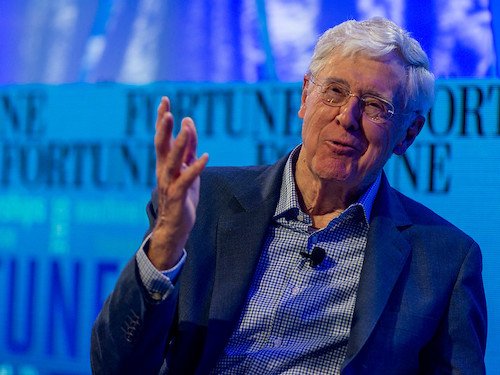 Koch Industries, the industrial conglomerate built on oil whose billionaire owners have funded climate denial campaigns and worked to slow down renewable energy development in the United States, is showing no sign of abandoning its operations in Russia in light of President Vladimir Putin’s brutal war against Ukraine—despite the wave of other businesses abandoning the country.

Since the invasion, Wichita, Kansas-based Koch “has given no indications that those business operations have been suspended,” writes corporate researcher Judd Legum, publisher of the Popular Information newsletter. “On the contrary, the limited public comments made by Koch subsidiaries operating in Russia indicate that their business activities have continued.”

“Guardian Industries continues to closely monitor the tumultuous events in Eastern Europe, supporting our employees who are affected,” Birladianu told USGlass Magazine. “The health and safety of our employees and all personnel working at our facilities is our first priority.”

Molex, an electronics components manufacturer that joined the Koch empire in 2013, has posted two letters on the “business continuity” issues arising from the war, Legum says. On February 25, the company said it was “monitoring the ongoing developments between Russia and Ukraine,” adding that “route adjustments have been initiated to mitigate product disruptions between Molex and our customers.” A second, nearly identical letter showed up on the Molex website March 1, with the reference to “Russia and Ukraine” changed to “Eastern Europe”.

Neither company responded to Popular Information’s request for information.

A third subsidiary, Koch-Glitsch, is an affiliate of Koch Engineered Solutions that maintains a sales office in Moscow. Neither company has commented on the war in public, Legum writes.

Popular Information recounts a controversy that erupted last year at the Washington, DC-based Atlantic Council, centring on Koch Industries CEO Charles Koch’s “alleged indifference” to Russia’s history of human rights violations. After two hired experts wrote an article for the Council arguing the U.S. should not have sanctioned Russia for the attempted assassination of opposition leader Alexei Navalny, more than 20 Council staffers “published a response criticizing the piece as misguided,” Legum says.

One of the signatories said the group was concerned that the article had been influenced by Charles Koch’s five-year, US$4.5-million donation to the Council. One of the two authors, Emma Ashford, later joined the Council from Cato Institute, a libertarian think tank funded by Koch.

“Koch industry operates as a Trojan horse operation trying to destroy good institutions and they have pretty much the same views as the Russians,” said the unnamed signatory. Atlantic Canada CEO Fred Kempe declared that allegation “outrageous”.