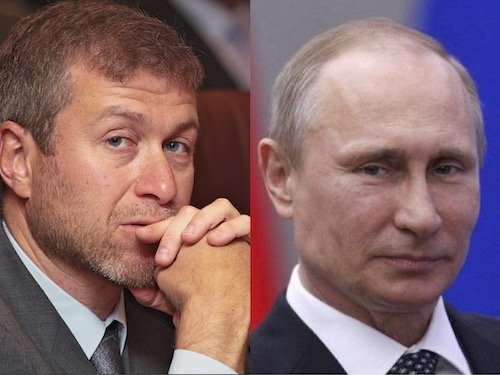 Steelworkers in Regina and politicians at all levels were scrambling to assess the local implications Friday after the federal government extended its Ukraine sanctions list to include Russian oligarch Roman Abramovich, a close associate of Vladimir Putin and part owner of the steel mill that produced pipe for the Trans Mountain and Coastal GasLink pipelines.

“In total, five top business leaders were added on Friday to the list of those deemed to be enabling President Vladimir Putin in his war against Ukraine,” CBC reported Friday, on the last day of Prime Minister Justin Trudeau’s trip through Europe. “The federal government also sanctioned 32 organizations and companies associated with Russia’s military and security services, including the country’s foreign intelligence service.”

In addition to his widely-publicized ownership of the Chelsea football club in the United Kingdom, Abramovich holds a 28.64% stake in Evraz, whose operations include Western Canada’s biggest steelmaking plant. Speaking from Warsaw, Trudeau said he was confident there would be no impact on the 1,700 workers at the Regina facility.

“The sanctions on Russian officials and oligarchs like Abramovich are directed at them so that they cannot profit or benefit from economic activities in Canada—or the hard work of Canadians working in companies that they have investments in,” he said. “We are obviously going to watch carefully, but we are confident that this will not impact the hard working Canadians who are doing good work in companies across the country.”

Evraz stocks fell 14% on news of the sanctions, Global News reports. Since February 16, a few days before the invasion began, the company has lost 84% of its value, says London, UK-based and Murdoch-owned Sky News.

The Oligarch and the Pipeline

While the sanctions brought on by the war are vaulting Abramovich into the headlines (and not in the way he would want), his status as a connector between Putin and Canadian pipeline construction is not new. In a May, 2018 dispatch for The Energy Mix, investigative reporter Paul McKay concluded that the federal government’s deal to buy the Trans Mountain Pipeline from Houston-based Kinder Morgan, which had not yet been finalized at the time, would give Canada and Abramovich a shared stake in the pipeline’s completion.

That was after Trans Mountain’s May 2, 2017 announcement that Evraz North America would supply about 250,000 tonnes of pipe for the project, enough for about 800 kilometres of pipeline construction. Evraz was also a supplier to the Coastal GasLink pipeline in British Columbia, where The Tyee’s Andrew MacLeod tweeted that the last of the steel was delivered in 2021.

McKay’s report explored Abramovich’s rise from his earlier line of work as an obscure rubber duck and doll supplier to an oil and mining oligarch, his close relationship with Putin—no doubt cemented by the $25-million yacht he donated to his longtime ally—and the environmental and worker health and safety issues at Evraz operations in Siberia.

Evraz, which also has facilities in Alberta, is one of the Saskatchewan capital’s largest employers, The Canadian Press reports.

More than a decade ago, Abramovich claimed there was “no truth” to allegations that he had close financial ties to Putin. But last week, British Prime Minister Boris Johnson said he had “clear evidence” that Abramovich is “connected to the Putin regime”.

The United Steelworkers union, which represents more than 1,000 Evraz workers in Saskatchewan and Alberta, said it supports the sanctions on Abramovich but warned the measures “must not imperil the livelihoods” of its members.

“Our members produce high-quality Canadian steel used in domestic projects and they have no ties to Russia,” Scott Lunny, the union’s director for Western Canada and the territories, said in a statement.

“The Prime Minister says the sanctions will not impact domestic workers at Evraz and we will hold his feet to the fire to ensure Canadian workers will not be harmed by the sanctions imposed on Abramovich.”

But Ari Pandes, an associate professor of finance at the University of Calgary’s Haskayne School of Business, said the “fluid” situation could still have an impact on the Regina plant. “There is certainly turmoil,” he told the Financial Post. “This type of uncertainty can bring about further losses as customers, suppliers, etc., grow anxious.”

One wild card, Pandes said, is whether (or when?) sanctions will be extended to other oligarchs with ownership stakes in the company. In his 2018 exposé for The Mix, McKay said Abramovich and his billionaire business partners Aleksandr Abramov, Aleksandr Frolov, and Russian-American businessman Eugene Shvidler held a combined 63% of the shares in the Luxembourg-registered Evraz Group.

In the days leading up to Trudeau’s announcement, Regina Mayor Sandra Masters expressed concern about the potential local impact of sanctions, adding that the easiest solution would be for Abramovich to sell his shares in the company.

“A disruption in the contracts or any sanctions would have a significant impact on our work force here,” Masters told CBC’s The House. She said she’d heard from constituents who were concerned about the potential ramifications for their community, though they didn’t support the oligarchs or Russia.

Abramovich leaving the company “is actually the way out of this in terms of the balance between needing to support Ukraine and accepting those sanctions, and protecting the employment and the contracts and the livelihood of those workers,” she added. But “ultimately, in some respects, it could be up to consumers. And so any contracts that Evraz Steel has… contracts could be cancelled, which would then impact, again, potentially the workers from the other side of things.”

But now that Abramovich’s assets are frozen, he can no longer sell the company even if he were willing to, the Guardian reported.

Regina city councillor and business professor Andrew Stevens said the most meaningful response for the federal government would be to expropriate the plant and turn it over to public ownership.

From Kingpin to Pariah

Stevens was talking about a company whose fortunes “are now unravelling at a speed almost without precedent for a member of the UK’s blue chip index,” wrote Sky News business presenter Ian King.

On Friday, the Guardian reported, 10 of Evraz’ 11 directors responded to the sanctions announcement by resigning. “Evraz is deeply concerned and saddened by the Ukraine-Russia conflict and hopes that a peaceful resolution will be found soon,” the company said in a statement. But in light of the financial sanctions and the suspension of the company’s shares from trading, “all the Evraz plc non-executive directors have resigned as directors with immediate effect. Aleksey Ivanov, the company’s chief executive, will continue as a director.”

Another director, James Rutherford, had quit the previous week, after just nine months on the board.

In its own sanctions announcement Thursday, the UK government “claimed that Abramovich effectively controls the company, that it may have made steel for Russian tanks, and that it supplied goods and services to the Russian government that could contribute to the invasion of Ukraine.”

In its reply to the UK announcement, Evraz maintained its steel had been supplied to Russia’s “infrastructure and construction sectors”, not for tank-making, the Guardian said. It also denied “that it is or has been involved in providing financial services, or making available funds, economic resources, goods, or technology that could contribute to destabilizing Ukraine or undermining or threatening the territorial integrity, sovereignty, or independence of Ukraine—which includes potentially supplying steel to the Russian military which may have been used in the production of tanks.”

But that won’t be enough to stop the company’s slide, King said.

“Friday morning’s boardroom exodus rather suggests that, despite the company’s best efforts to distance itself from Abramovich, it recognizes that the game is up,” he wrote. “Evraz has not done itself any favours by failing to condemn the Russian government unequivocally for its invasion of Ukraine—something that has been done by most Western companies that have announced the suspension or closure of their Russian operations during recent days.”

King said the “weasel words” in the company’s latest statement “point to a reluctance at the company to antagonize the Russian president.”

The probable next step, delisting Evraz from the London Stock Exchange, “would crystallize big losses for clients of a number of well-known institutional shareholders in Evraz that include Schroders, BlackRock, Vanguard, and Pictet Asset Management,” he added. It will also be an issue for the investment funds that had bought into the company since January 2018, when it was added to the Financial Times Stock Exchange 500.

Abramaovich’s public shunning is also getting personal, with his ties to the Yad Vashem Holocaust memorial in Jerusalem now suspended. Less than a month ago, the museum had joined the oligarch to announce an eight-figure strategic partnership “aimed at strengthening Yad Vashem’s endeavors in the areas of Holocaust research and remembrance”. Now, “in light of recent developments, Yad Vashem has decided to suspend the strategic partnership with Mr. Roman Abramovich,” the centre said in a statement.

And back in Regina, the local exhibition grounds operated by Regina Exhibition Association Ltd. has sped up the process of rebranding from Evraz Place to the REAL District—for a mix of pragmatic and principled reasons.

“We very often get packages that are destined for Evraz Steel or we have people phone us looking for the human resources office at Evraz Steel, and I’m sure they get people calling them looking for tickets,” said REAL President and CEO Tim Reid. But “the reason for the shift was recognizing the humanitarian crisis that’s happening in Ukraine. And the fact that our business was opening [post-pandemic], we wanted to be able to transition to the REAL District now.”