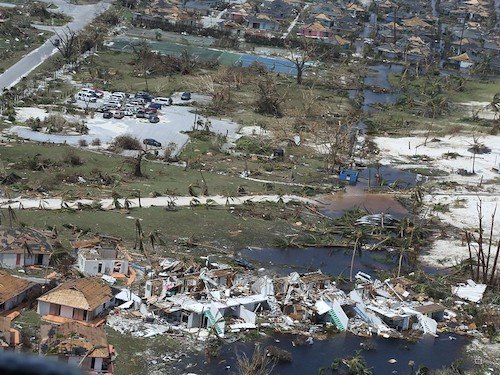 Dr. Adelle Thomas is an IPCC scientist, and was one of only six authors from Small Island Developing States among the 270 who produced the Panel’s recent report on climate impacts, adaptation, and vulnerability. In this post, she traces her earliest memory of climate impacts to a hurricane in The Bahamas in 1992, and talks about all that has changed since.

My earliest memory associated with climate change is a hurricane. Hurricane Andrew in 1992 saw my sisters and I climb into the bathtub with a loaf of bread to wait out the storm. When my grandmother came home from work the next day we got to work to clean up.

Flash forward to 2019: when Hurricane Dorian hit The Bahamas, my grandparents’ house was completely swept away. There was nothing left to clean up, not even the foundation.

The Intergovernmental Panel on Climate Change’s (IPCC) latest report on impacts, adaptation and vulnerability speaks to the larger story behind my personal experience: the scientific evidence is now stronger than ever that climate change is having significant impacts on people and ecosystems around the world.

Despite efforts under way to adapt, we are experiencing dangerous and widespread destruction of nature, and the lives of billions of people are being affected.

Even rich nations like Germany, Australia, and the United States are now experiencing losses and damages—where climate change impacts are beyond the limits of what we could ever feasibly adapt to. In developing countries, this has been the grim reality for many years.

Vulnerable countries experience climate impacts more acutely and are less able to respond because their governments are juggling high levels of poverty, debt, food insecurity, and a lack of funding for adaptation, all of which are being exacerbated by COVID-19.

Adaptation efforts are also unevenly distributed globally, with individuals and households in the developing world already reaching the limits of what they can adapt to.

In global hotspots of vulnerability in the developing world, deaths from extreme events were 15 times higher than in the developed world. 15 times. Climate inequity and injustice is already the difference between life and death.

We now know climate change risks will increase in the future, and SIDS and LDCs will bear the brunt. SIDS and other coastal communities will be at much higher risk to flooding and sea level rise, with the potential of submersion of communities.

In LDCs, where many are reliant on subsistence agriculture, climate change threatens to reduce yields and even end the viability of producing certain crops, contributing to food insecurity and forced migration.

International climate action is anchored by the 1.5°C goal of the Paris Agreement. Right now we are experiencing many impacts at a global average of 1.1°C of warming. It’s estimated that with current policies and climate action we are headed for between 2.5 and 2.9°C of warming by the end of the century. And if we don’t halve our emissions this decade, models tell us we won’t be able to meet that crucial 1.5°C limit.

Overshooting 1.5°C, even temporarily, will result in severe and potentially irreversible impacts such as species extinctions and losses of entire ecosystems such as tropical coral reefs and coastal wetlands.

For communities around the world, this would devastate livelihoods, coastal protections, and cultural and spiritual values that are linked to these ecosystems. Tourism, food security, and even the habitability of coastal areas and islands are all at high risk if we exceed 1.5°C of warming.

A key assessment coming from the IPCC is that, while adaptation can help to reduce some of these risks, there are limits to where adaptation will get us—losses and damages are a certainty. And this is already happening.

Beyond 1.5°C, the scope and options that are available for adaptation are drastically reduced. And those that are pursued are likely to become less and less effective, and more expensive. For coastal communities in particular, adaptation measures will simply not be able to prevent all damages from flooding, more intense tropical storms, and the trauma of experiencing these events.

If the world fails to limit warming to 1.5°C, it will fundamentally undermine the development prospects for those countries that have contributed the least to climate change, but suffer the most severe consequences.

I am a scientist. But this is personal for me. Forty per cent of The Bahamas, my home, is within one metre of sea level rise and at risk of permanent inundation. The world is an inequitable place and climate change has not and will not have the same effects everywhere. But my hope is that this report will serve to underscore the sense of urgency that those of us who are already acutely experiencing climate impacts feel. Our future depends on it.