Rich Countries Close In on $100B Pledge for International Climate Finance 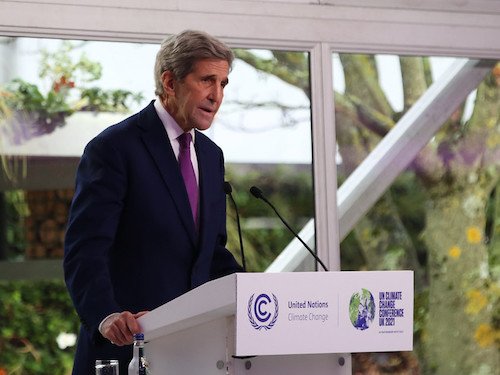 Rich countries may finally be on the verge of keeping their promise to deliver US$100 billion per year in international climate finance, but only by relying on private investment that isn’t well suited to some of the most urgent needs where people are most vulnerable to climate impacts.

At an informal meeting of the United Nations Security Council Thursday, United States climate envoy John Kerry said the world’s wealthiest nations are poised to fulfill a pledge that goes back to the 2009 UN climate conference in Copenhagen—and was supposed to be met by 2020. Last year, those nations stood accused of a “breathtaking” lack of commitment after an effort by then-Canadian environment minister Jonathan Wilkinson and his counterpart from Germany, Jochen Flasbarth, fell short of the $100-billion threshold.

“This lack of ambition is breathtaking,” and “it is the people living on the front line of the climate emergency who will bear the brunt,” Fionna Smyth, head of global policy and advocacy at London, U.K.-based Christian Aid, said at the time. “It is over a decade since the world’s richer countries agreed to $100 billion a year in climate finance by 2020. It was already a drop in the ocean, yet still the target has been missed and is now set to be watered down.”

Under the Climate Finance Delivery Plan [pdf] that Wilkinson and Flasbarth brokered on behalf of COP 26 President Alok Sharma, the target year to make good on the pledge was postponed to 2023. Because of epic delays and limited transparency in international climate finance reporting, countries won’t be able to verify the 2023 figure until 2025.

Now, The Associated Press reports, Kerry says governments are on track to meet the revised deadline, and possibly even pick up the pace. He put that down to the Biden administration’s commitment last September to quadruple the annual U.S. contribution from the Barack Obama’s era, to more than $11 billion per year.

Speaking less than two weeks after the devastating report on climate impacts, adaptation, and vulnerability issued by the Intergovernmental Panel on Climate Change, Kerry said the U.S. funding would include “an emergency plan for adaptation and resilience”. That cash infusion “is going to help more than 500 million people in developing countries to be able to manage the impacts of the climate crisis by 2030.”

But Kerry also pointed to one of the larger challenges in international finance challenge, noting that it won’t be possible to fund the climate action required on the global scene without big infusions of private investment.

“No single government—no group of governments—can meet the $2.5 trillion to $4.6 trillion deficit that we face in order to effect this transition,” he said. “The private sector will be critical to our success because there are trillions of dollars to legitimately invest in this transition.”

The IPCC report took a more nuanced view of that funding, noting that adaptation and resilience projects often generate social and community benefits but not the profits that would bring private investors into the picture. Last week, Bloomberg Green reported that private financial institutions—including the Bank of Nova Scotia and the Royal Bank of Canada—were scaling back their business in Caribbean islands facing severe impacts from extreme weather and rising sea levels.

“While they haven’t cited the risk of conducting business in climate-vulnerable nations, the moves are leaving the Caribbean with less access to international markets at a time they need it most,” Bloomberg wrote, citing Michai Robertson, an advisor to the chair of the Alliance of Small Island States.

“They don’t say outright ‘this is the reason why we’re leaving the country,’ but it has to more than likely fall under financial viability of it all,” Robertson said from his family home on Antigua, adding that the capital flight began “after the major hurricanes that plagued our region”.