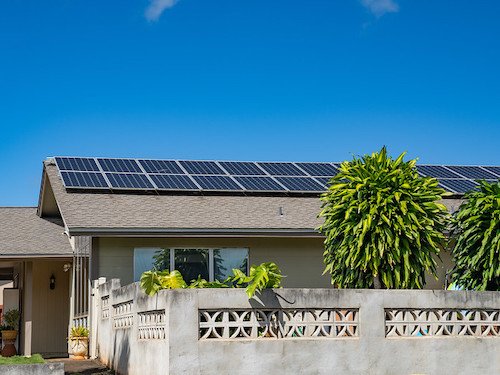 Hawaiian households with rooftop solar will soon be rewarded for sharing electricity with the grid at peak hours, while in California, three utilities are pushing to make solar-equipped homes pay extra fees as their monthly power bills go down.

“In many places around the U.S., utilities treat rooftop solar as an obstacle,” writes Canary Media, but “things are playing out differently” on Hawaii’s most populous island, Oahu.

The state’s monopoly utility, Hawaiian Electric, has teamed up with advocates of customer-owned energy to say households should earn money to keep power flowing to the grid, the news story states.

To this end, Hawaii’s Public Utilities Commission has approved a program to pay households an upfront cash bonus plus a monthly credit on their bills for adding a battery to their rooftop solar—a move that comes as Oahu prepares to ramp up renewables and shutter its AES coal plant, the large supplier of power on the island, Canary Media says.

The new Battery Bonus program will see participants receive a $5-per-kilowatt monthly bill credit for the next 10 years. In exchange, homeowners must export a dedicated two hours of power back to the grid daily, between the peak hours of 6:00 P.M. and 8:30 P.M., over that time.

“Essentially, they [will] use their battery to store up solar power during the day and then export it after the sun sets to help meet peak demand,” writes Canary.

The new program is an update on the earlier Battery Bonus program regulators introduced last July in an emergency effort to access more electricity.

Under the new program, householders with a 5-kw battery would receive “$4,250 immediately, plus $3,000 distributed over a decade’s time in $25 monthly credits.” That sum would not fully cover a battery purchase, but would greatly reduce the cost.

The approval comes as California’s three investor-owned utilities—Pacific Gas & Electric, Southern California Edison, and San Diego Gas & Electric—push the California Public Utility Commission to add a monthly charge of $8 per kilowatt of solar production capacity for owners of new rooftop solar systems, a penalty which would add $40 to $50 per month in fees to the average system.

As explained in an earlier Canary post, the utilities are arguing that the state’s existing net-metering program—a billing mechanism that allows homes to use the power they generate anytime, rather than just the time it is generated—leaves customers who cannot afford rooftop solar paying more than their share of the fixed costs that solar-equipped customers escape due to their low monthly power bills. Bundled into the bill, these fixed costs include “maintaining and building new grid infrastructure and paying for power plants and solar farms built or contracted by utilities in previous years.”

The utilities have long claimed that this cost imbalance grows with every rooftop system installed, and that it could reach a point where they are forced “to raise rates on all customers to make up the difference, leading to an unfair burden on non-solar customers and an unsustainable utility system.”

California’s solar industry disputes these claims, arguing that the utilities have “dramatically overstated the scope of the cost shift from net-metered solar and the impact it has had on increasing utility rates.” They point to the costs of building new transmission lines, as well as hardening the grid against wildfires, as the true drivers behind California’s rising utility bills.

Hawaiian Electric approved four megawatts of Battery Bonus applications last year under the old program, said Yoh Kawanami, the utility’s director of customer energy resources overseeing operations. But the goal was to gain 50 MW of capacity. “We had a common goal to accelerate the pace and increase enrollment, allowing us to agree on the majority of the proposed amendment,” Kawanami said, adding he expects increased participation in the new program.

Hawaii is “already in the thick of its transition to clean energy,” writes Canary Media, noting that the state was the first in the U.S. to mandate the move to 100% renewables, by 2045 in its case. And progress is apparent: “Hawaiian Electric just announced that it produced 38.4% of its electricity from renewables in 2021, up from 34.5% in 2020.”

Having cleared its regulatory hurdle, the new Battery Bonus program will now have to clear the operational one. Hawaiian Electric and the solar installers will need to ensure that batteries perform as expected, with “thousands of devices delivering power reliably when the two-hour evening peak rolls around.”