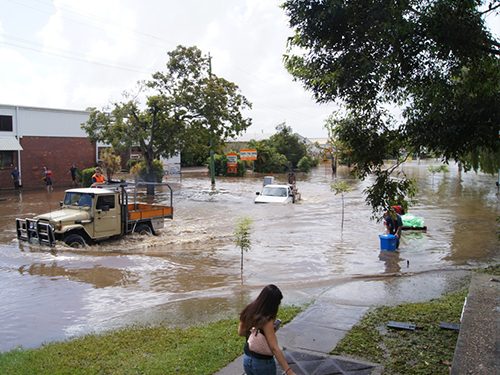 As an ongoing La Niña weather pattern inundated nearly 300 kilometres of Australia’s East Coast to cause record flooding and kill more than 20 people, this is “the right time to talk about climate change,” the Sydney Morning Herald stated, in an editorial criticizing the government’s inaction.

“While the Coalition government took an important step before the recent Glasgow Summit by adopting a target of zero net emissions by 2050, it is still lukewarm, at best, in its efforts to cut emissions.”

The storms began in Gympie, Queensland, on February 22 and passed through several coastal towns before dumping 80% of annual rainfall levels on the city of Brisbane. Queensland Premier Annastacia Palaszczuk described the event as a “rain bomb,” reported The Washington Post.

The floods devastated local communities as homes succumbed to the rising waters. Residents with boats stepped up to help neighbours trapped in homes as authorities were overwhelmed by the scale of rescue operations. Locals said the weather event was unlike any they had experienced before.

“In Lismore, we do floods. This is not a flood, it’s a catastrophe,” incoming New South Wales Greens upper house member and Lismore resident Sue Higginson told The Guardian. “This is climate change. My friends are now risking their lives, they’re going from roof to roof and they’re picking up traumatized, screaming people. There’s just not enough boats.”

Roughly 40,000 people live in the catchment area around Lismore.

La Niña weather patterns originate from cyclical changes in the Pacific Ocean to cause cool, wet weather in northern and eastern Australia and dry conditions in the country’s southwest. Meteorologists say this season’s extreme rainfall levels have been caused by torrents on a pool of cold air at high altitudes that destabilized the atmosphere, and by a zone of high pressure near New Zealand that stalled the high-pressure storm system to linger in place and prolong the unsettled conditions in Australia.

“The excessive and, in some cases, record-setting rainfall is the type of event that is expected to become more frequent in a warming climate,” the Post said, adding that the Intergovernmental Panel on Climate Change expects heavy precipitation events to increase in the coming decades as atmospheric temperatures rise.

Australia has experienced many natural disasters in recent years, but has not been proactive about pursuing policies to combat climate change, Shields wrote, adding that “rather than taking the lead in cutting emissions, the government too often sides with the fossil fuel lobby.”

Emergency Management Minister Bridget McKenzie has agreed that climate change brings “intense and irregular events,” and yet she is a key supporter of the NSW coal industry, Shields added. “Her government is still not taking all the steps needed to avoid the worrying predictions of the IPCC’s report.”

The editorial framed that as a missed opportunity. “Australia’s resources of wind and solar put it in an ideal position to reduce the role of coal and gas in its power grid, unlike Europe which is desperately trying to end its dependence on imported Russian gas,” Shields wrote. But “alongside faster reductions in emissions, Australia must better prepare for the inevitable natural disasters that lie ahead.”