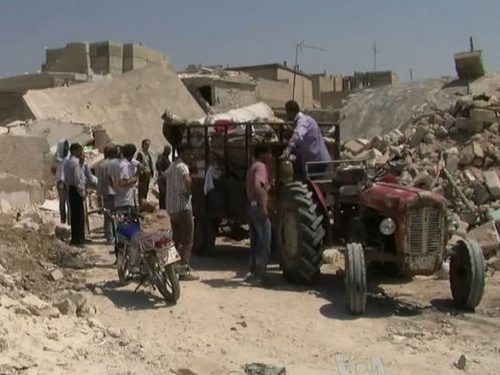 For some parts of the Middle East, the current drought that began in 1998 is the worst in nine centuries, and the past two years have been especially severe, says the New York Times.

“A particularly bad drought year has bled into the consequences of extended conflict, grimmer macroeconomics, and other non-climate environmental challenges to hobble pastoralism and agriculture, the livelihoods that had arguably withstood the war better than most,” reports Pax for Peace.

The ongoing drought is one of climate change’s most devastating effects on the region. Climate scientists project that droughts will worsen in coming years and farmers will be unable to rely on rainfall or water from snowmelt for irrigation and other agricultural uses.

Analysts worry that water tensions will give rise to more violence because the war-fractured country lacks the government and support systems that could alleviate the drought’s worst outcomes.

“A community’s vulnerability to drought is more important than the drought itself,” Lina Eklund, a physical geography researcher at Sweden’s Lund University, told BBC.

The resilience of Syria’s rural communities is weaker than in other water-scarce regions nearby, like the Kurdistan region of Iraq. Tight-knit Kurdish communities did not experience the exodus, discontent, or subsequent infighting from the same drought as Syria, BBC says—which triggered by the regime of President Bashar al-Assad scrapping subsidies for farmers mid-drought.

Agriculture, along with pastoralism, comprised roughly 19% of the country’s GDP before the civil war and sustained more than half of all jobs. But many families’ incomes and food stores are wearing thin as the region’s parched landscape yields fewer crops and less grazing land—local yields of barley are about a million tonnes below normal, and between 2005 and 2010 local herders lost approximately 80 to 85% of their livestock due to insufficient water supply, Pax for Peace says.

Farmers who borrowed to cover losses from low yields have been unable to pay off debts after their incomes continued to plummet, and families that were already living hand-to-mouth now have even less money for clothes, transportation, or school supplies for children. With no other options, many people have migrated to eke out a living in cities “where even urban slums [seem] preferable to rural life.”

The “rural misery, which has been amplified by a near-total lack of state capacity after so much fighting, is fragmenting some of the few areas of comparative normality the country has left,” writes Pax for Peace.

International water politics are also restricting water flows, as competing regional interests weaponize water for their own ends. The Turkish military now controls Syria’s three largest dams after it intervened against the expansion of Kurdish forces into the Kurdish-led Autonomous Administration of North and East Syria. Daesh (also known as the Islamic State), which is occupying areas of the country as it fights against the al-Assad regime, also controls water resources as a military and political tactic and to generate revenue, reports the Atlantic Council.