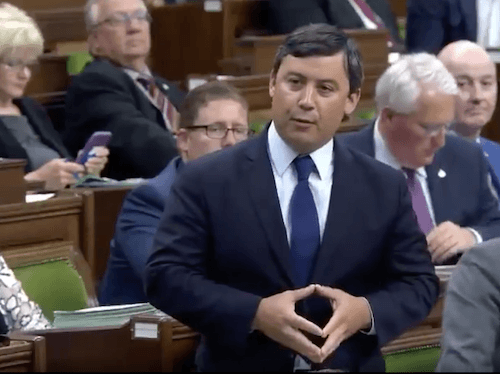 The motion by Chong (CPC, Wellington-Halton Hills), a veteran MP believed to be considering his second run for the Conservative Party leadership, calls on the House of Commons to condemn Putin’s “unprovoked, illegal attack and invasion of Ukraine” and “stand with Ukraine, the people of Ukraine, and Canadians in the Ukrainian community”.

Then it pivots, instructing the federal government “to undertake measures to ensure new natural gas pipelines can be approved and built to Atlantic tidewater, recognizing [fossil] energy as vital to Canadian and European defence and security, allowing Canadian natural gas to displace Russian natural gas in Europe, and being consistent with environmental goals in the transition to non-emitting sources of energy.”

Chong did not respond to an email from The Energy Mix asking how a repeat GreenPAC endorsee proposes a natural gas pipeline expansion, less than 100 hours after a devastating UN agency report documented the “atlas of human suffering” that awaits without immediate action to curtail greenhouse gas emissions. His executive assistant said he would be unable to comment “due to his busy Parliamentary schedule”.

While Chong’s motion is non-binding, it still gave the Conservatives “a full day to make the case for fast-tracking the pipeline approval process, while simultaneously forcing the government to put its position on the parliamentary record when it goes to a vote, although that likely won’t happen before the chamber reopens for business following the looming two-week hiatus,” explained iPolitics’ self-described “process nerd” Kady O’Malley.

The response from climate campaign groups was quick and scathing.

“It is truly diabolical to exploit a humanitarian crisis to line the pockets of the fossil fuel industry,” 350.org campaigner Emma Jackson wrote in an alert to supporters Thursday afternoon. “Building more pipelines will do nothing to help the Ukrainian people. Fossil fuels drive both war and climate change,” and “new pipelines only serve to lock us into more dependence for decades to come.”

“Canadians should be disgusted to watch the oil and gas industry rush to profiteer from the Russian invasion that is killing thousands of Ukrainians to try to sell more of a product that will kill tens of millions unless we stop producing it,” said Environmental Defence Canada Executive Director Tim Gray.

“The fossil lobby is once again seizing upon a crisis with horrific human consequences to promote its destructive agenda,” said Caroline Brouillette, national policy manager at Climate Action Network-Canada. “Doubling down on fossil fuel production will only further entrench energy insecurity and climate vulnerability. To defuse Putin’s weaponization of oil and gas, governments must prioritize human rights, energy security, and a climate-safe future by accelerating their efforts towards a just transition away from fossil fuels.”

About an hour after the 350.org alert, Jackson tweeted that “certain [environmental NGOs] might want to reconsider their claim of Michael Chong—or any Conservative for that matter—being a ‘climate champion.’ Climate champions don’t opportunistically leverage war to expand fossil fuel infrastructure during a climate emergency.”

Chong has received GreenPAC’s endorsement in all three of the federal election campaigns since 2015. A GreenPAC spokesperson was unavailable to comment as The Mix went to virtual press last night.

(Disclosure: The Energy Mix publisher Mitchell Beer is a member of GreenPAC’s Council of Advisors.)

350.org campaigner Cam Fenton said the motion was “somewhat shocking” because of Chong’s own history on climate policy.

Chong “has been held up as a voice, if not the lone voice in the Conservative Party who at least understands climate,” Fenton told The Mix; he’s seen as a respected voice in his caucus and “a supposed Conservative climate hawk”. But “to come out saying that building these fossil fuel projects is necessary runs entirely against what climate scientists, economists, what everyone in the world is saying needs to happen.”

Fenton said there’s “value in a debate over whether doubling down on fossil fuels is a way to deal with the energy economics that are tied up in this crisis,” and Canada needs to have “frank conversations and frank debates” about how to phase out fossil fuels and build a just transition for affected communities and workers.

But “if the goal is to get there, this motion is a ham-fisted way” to do it, Fenton said. And “it’s a stretch to think that somehow Canada is going to propose, approve, build, and construct a pipeline that moves natural gas from Western Canada to Eastern Canada onto ships to Europe to somehow support Ukraine right now.”

That much more ludicrous, he added, was some MPs’ suggestion that that gas could then be processed into nitrogen fertilizer—in time for this year’s growing season.