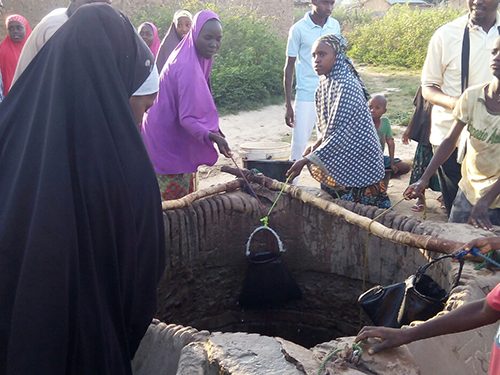 Severe water shortages are going to affect up to half of the world’s population if current warming trends are not curtailed, according to the latest scientific estimates consolidated in this week’s impacts, adaptation, and vulnerability report from the Intergovernmental Panel on Climate Change (IPCC).

Even if politicians do manage to keep temperatures below 2°C, up to three billion people may suffer “chronic” water scarcity, the IPCC says.

Within 30 years, very large areas of the globe and among the most heavily populated areas are at highest risk. This is partly because the causes of the problem—drought, lack of rainfall, and increased evaporation because of higher temperatures—are the most difficult aspects of the climate emergency to adapt to.

Around 2050, at approximately 2°0C average global warming, severe water scarcity has a relatively high likelihood across large parts of the southern United States and Mexico, northern Africa, parts of the Middle East, northern China, and southern Australia, the authors conclude. Many parts of northwest India and Pakistan will also be affected.

Chronic water scarcity is defined as less than 1,000 cubic metres of water per person per year in the affected area. This includes fresh water in the landscape, including soil moisture, stream flows, and water needed for agriculture as well as household use.

On this measure, 1.6 billion people currently experience chronic water shortages. There are uncertainties, but a 2°C increase in temperature means an additional 800 million to three billion will suffer chronic shortages. At a 4°C increase, this will rise to four billion—more than half the world’s current population.

As well as environmental reasons, lack of security in water supply can also be caused by poor government of the available resources. The result is loss of lives, property, livelihoods, and culture, impacts on human health and nutrition, and damage to animal and plant life.

It can also lead to conflicts over water resources—an underlying cause of war—followed by human migration.

One of the problems with water scarcity is that it cannot always be foreseen, and even where it is, can outpace putting in large infrastructure like dams needed to deal with it. It might also coincide with other effects of climate change like a pandemic.

One of the key findings on water shortages is that the predictions they will be “severe” is made with “high confidence” because so many scientists in different studies have come to the same conclusions. Many other parts of the IPCC report are classed as “medium” or “low confidence” predictions because far fewer papers have come to similar findings.

Apart from conflicts between water users, hindering social and economic development the shortage of water leads to malnutrition—particularly to the stunting of growth in children.

As well as water shortages, the report deals with flooding. Currently 50 million people a year are affected by river and flash flooding. This figure could rise to 150 million people a year at 2°C global warming, and more than 300 million at 4°C.  By 2030, the World Health Organization projects increased flood risk leading to an additional 48,000 deaths of children under five due to diarrhoea, with Sub-Saharan Africa seeing the greatest impact. Other consequences of floods include deaths by drowning, loss of access to fresh water, vector-borne diseases like malaria, mental health problems, and loss of homes and livelihoods.

Some water shortages, caused by loss of ice in mountain and polar regions, can have severe cultural implications as well as other deprivations, with changes in streamflow affecting the availability of species like salmon. It is virtually certain that further warming will lead to greater reductions in Northern Hemisphere snow cover and glacier regions, resulting in water scarcity, flooding, and changes in water bodies. Those impacts, in turn, will lead to severe outcomes from water-related diseases, drowning and starvation, long-term health impacts because of malnutrition and diseases, loss of livelihoods, and loss of aspects of culture and places of cultural significance. The number of people affected ranges from hundreds of millions to several billion, depending on temperature increases.

Finally, the IPCC reports high agreement among scientists that there will be severe impacts on migration and potential for armed conflict because of water scarcity, although it stops short of predicting how many will move or how many will be killed as a result. The scientific literature offers indirect evidence “that climate change may produce severe risks to peace within this century,” the scientists warn.