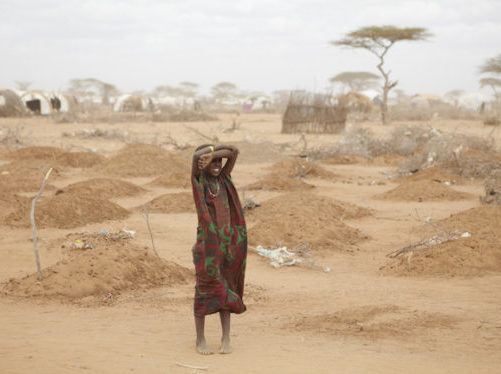 Since its last full science assessment in 2014 and 2015, “climate-related illnesses, premature deaths, malnutrition in all its forms, and threats to mental health and well-being are increasing,” while “climate hazards are a growing driver of involuntary migration and displacement, and are a contributing factor to violent conflict,” the Intergovernmental Panel on Climate Change (IPCC) concludes in this week’s report on climate impacts and adaptation.

“These impacts are often interconnected, are unevenly distributed across and within societies, and will continue to be experienced inequitably,” the report adds.

In the nearly 10 years since the IPCC’s last full report, comprehensive frameworks like “planetary health,” “one-health,” and “eco-health” have evolved to study and frame global health issues. They all “share an ecological perspective, emphasize the role of complex systems, and highlight the need for interdisciplinary approaches related to human health research and practice,” writes the IPCC.

Now there is increasing “overlap in literature on global health, climate change impacts, and estimates of loss and damage,” the report states, citing the fact that “morbidity associated with migration and displacement, especially in the context of small island states, has been identified as a non-material form of loss and damage.”

The authors note “a steady increase in standardized, globally scoped, data-driven health impact assessments,” together with an “ongoing emphasis on the social determinants of health,” with the climate crisis looming ever larger.

What remains lacking, however, is a complete framework that would allow for a cumulative assessment of the intersections between health, well-being, and climate breakdown.

The IPCC adds that even as the global health knowledge base expands, “significant cracks in the foundation of global health governance that affect preparedness and adaptive capacity for climate change, among other threats, have been laid bare.”

As with climate impacts in general, climate-driven injuries to health and well-being are being disproportionately experienced by already vulnerable populations, including women and girls, children, and Indigenous peoples.

In many cultures—due to constraints on livelihood and mobility—women and girls are more likely to be exposed to climate risks like heat stress and air pollution. They are also “more likely to die in extreme weather events,” and to suffer from increases in domestic violence that have been correlated with climatic extremes and water scarcity.

“Children often have unique pathways of exposure and sensitivity to climate hazards, given their immature physiology and metabolism, and high intake of air, food, and water relative to their body weight as compared with adults,” the authors note.

They add that climate change-driven food insecurity, water scarcity, and “changes in maternal and child care access and breastfeeding” will mean increased childhood risks of infectious disease and malnutrition in low-income countries.

Extreme water stress among the Indigenous Bedouin who live nomadically along the Jordan River, extreme food insecurity among sub-Saharan pastoralists, and “alarming levels of respiratory distress and disease” among Canada’s First Nations and Inuit in the wake of wildfires are just three of myriad examples given to demonstrate how climate change is damaging the well-being of Indigenous peoples everywhere on Earth.

The authors also mention that melting permafrost is “creating the potential” for highly neurotoxic mercury to enter the food chain, creating yet a further hazard for northern peoples.

Increased temperatures, humidity, and precipitation are “significantly and positively associated” with observed increases in vector-borne diseases like dengue, chikungunya virus (in Asia, Latin America, North America, and Europe), and various Lyme disease vectors in both Europe and North America.

Diarrheal diseases like cholera and foodborne illnesses like salmonella are likewise associated with spiking temperatures and heavy rain, as well as flooding, a trend that bodes very ill for infants and children.

Observing that “some regions are already experiencing heat stress conditions at or approaching the upper limits,” including the Persian Gulf, Pakistan, the Gulf of California, the southern Gulf of Mexico, and coastal Venezuela, the IPCC report warns of ever escalating mortality from rising temperatures, especially in cities, and among the urban poor.

Exposure to extreme weather and climate variability is also a significant driver of malnutrition, as crop damage or supply chain ruptures lead to food insecurity, with children and pregnant women particularly likely to suffer nutrition and health impacts. And many are already going without.

The climate crisis is also disrupting the long-term stability of communities, with extreme climate events acting “as both direct drivers (eg. destruction of homes by tropical cyclones) and as indirect drivers (eg. rural income losses during prolonged droughts) of involuntary migration and displacement.”

According to the Internal Displacement Monitoring Centre, more than 20 million people are now internally displaced each year because of extreme weather, with storms and floods the primary drivers, and Asia experiencing the greatest absolute movement of peoples, followed by sub-Saharan Africa.

The IPCC notes that “with every additional one degree Celsius of warming, the global risks of involuntary displacement due to flood events have been projected to rise by approximately 50%.”

Much is at stake in how the world decides to balance climate change mitigation with development, the IPCC writes. “Future violent conflict risk is highly mediated by socio-economic development trajectories, and so trajectories that prioritize economic growth, political rights, and sustainability are associated with lower conflict risk.”

The IPCC expresses high confidence that “with proactive, timely, and effective adaptation, many risks for human health and wellbeing could be reduced and some potentially avoided.”

But that will mean an urgent shift away from the incremental changes that have been the norm for adaptation efforts to date, towards truly transformational ones which “address the wider interactions between environmental change, socio-economic development, and human health and well-being,” the report states.

Transformational changes “will be more effective if they are responsive to regional, local, and Indigenous knowledge, and consider the many dimensions of vulnerability, including those that are gender- and age-specific,” the authors add.

One example of a transformative, climate-resilient change in the health sector, notes the IPCC, would be to ensure universal access to primary health care, with mental health supports included.

Observing that such climate resilient development “has a strong potential to generate substantial co-benefits for health and well-being,” the IPCC adds that “the net global financial gains from these co-benefits to health and well-being, including avoided hospitalizations, morbidity, and premature deaths, exceed the financial costs of mitigation.”

The money to be saved just bey improving air quality “is projected to be greater than the costs of meeting the goals of the Paris Agreement.”

Concerted and systemic resilience development will also reduce future risks of involuntary migration and displacement, both within and between states, “by addressing both the drivers of grievances that lead to conflict and vulnerability to climate change.”

Very promising in this regard, writes the IPCC, is “environmental peacebuilding through natural resource sharing, conflict-sensitive adaptation, and climate-resilient peacebuilding.”

While the efficacy of these efforts has yet to be fully proven, “formal institutional arrangements for natural resource management have been shown to contribute to wider cooperation and peacebuilding, and gender-based approaches provide underutilized pathways to achieving sustainable peace.”