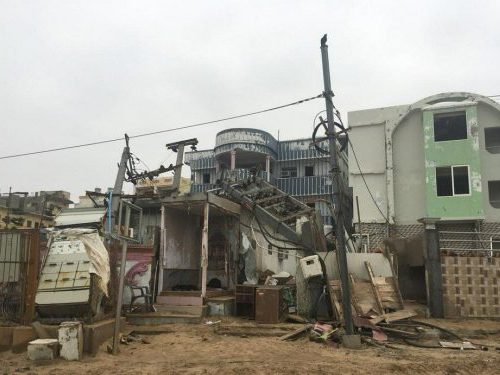 Limiting global warming to 1.5°C would still cause “unavoidable increases in multiple climate hazards” for the 3.3 to 3.6 billion people whose living conditions make them vulnerable to those impacts, the Intergovernmental Panel on Climate Change (IPCC) reports, in an exhaustive overview of the latest science on climate impacts and adaptation strategies released today.

The Energy Mix will be out Wednesday with a special report on the full IPCC release. Click here to subscribe.

Across the thousands of studies that went into the IPCC Summary for Policymakers (SPM) published this morning, “the cumulative scientific evidence is unequivocal,” the Geneva-based UN agency concludes. “Climate change is a threat to human well-being and planetary health,” and any further delay in drastically reducing greenhouse gas emissions “will miss a brief and rapidly closing window of opportunity to secure a liveable and sustainable future for all.”

Even 1.5°C average global warming, often seen as a relatively safe target for rapid decarbonization efforts, “would cause unavoidable increases in multiple climate hazards and present multiple risks to ecosystems and humans,” the IPCC says. “Near-term actions that limit global warming to close to 1.5°C would substantially reduce projected losses and damages related to climate change in human systems and ecosystems, compared to higher warming levels, but cannot eliminate them all.”

And if humanity temporarily “overshoots” the 1.5°C target, “many human and natural systems will face additional severe risks,” some of those impacts “will cause release of additional greenhouse gases,” and “some will be irreversible, even if global warming is reduced.”

Since the IPCC produced its last assessment report in 2014 and 2015, “there is increasing evidence that degradation and destruction of ecosystems by humans increases the vulnerability of people,” the SPM states. “Unsustainable land use and land cover change, unsustainable use of natural resources, deforestation, loss of biodiversity, pollution, and their interactions, adversely affect the capacities of ecosystems, societies, communities, and individuals to adapt to climate change.”

Ecosystem loss “has cascading and long-term impacts on people globally,” the summary adds, “especially for Indigenous Peoples and local communities who are directly dependent on ecosystems to meet basic needs.”

This week’s IPCC report is the second of three from the working groups conducting the agency’s sixth global assessment of the state of the global climate. The science assessment last August affirmed that human activity is “unequivocally” producing a world of heat waves, wildfires, floods, sea level rise, and needless death and suffering and warned of an “unimaginable, unforgiving world” without drastic reductions in greenhouse gas emissions. The last working group report in the series, dealing with emission reduction strategies, is due in early April, with the IPCC’s final synthesis report scheduled for September.

The policy-makers’ summary of this week’s report includes sections on current and future climate impacts, adaptation measures and their limits, and strategies for climate resilience. It warns that the risk of the full range of serious climate impacts over the next two decades “becomes high to very high” at lower levels of global warming than scientists realized when the last assessment was published.

Those overlaps and collisions will continue to make the climate emergency “more difficult to manage. Multiple climate hazards will occur simultaneously, and multiple climatic and non-climatic risks will interact, resulting in compounding overall risk and risks cascading across sectors and regions.”

Between 2041 and 2100, “for 127 identified key risks, assessed mid- and long-term impacts are up to multiple times higher than currently observed,” the IPCC adds. But “the magnitude and rate of climate change and associated risks depend strongly on near-term mitigation and adaptation actions,” since every increment of additional warming will bring more serious climate impacts, with accompanying loss and damage.

The scientists also conclude that some actions meant to address the climate emergency, particularly carbon dioxide removal, will do more harm than good. “Solar radiation modification approaches, if they were to be implemented, introduce a widespread range of new risks to people and ecosystems, which are not well understood,” the report states. And “deployment of afforestation of naturally unforested land, or poorly implemented bioenergy, with or without carbon capture and storage, can compound climate-related risks to biodiversity, water and food security, and livelihoods, especially if implemented at large scales, especially in regions with insecure land tenure.”

While countries have produced “multiple benefits” with their efforts to adapt to climate change, that progress is “unevenly distributed”, with many initiatives that “prioritize immediate and near- term climate risk reduction which reduces the opportunity for transformational adaptation,” the IPCC warns.

“Growing public and political awareness of climate impacts and risks has resulted in at least 170 countries and many cities including adaptation in their climate policies and planning processes,” the summary says. But those efforts are “fragmented, small in scale, incremental, sector-specific, designed to respond to current impacts or near-term risks, and focused more on planning rather than implementation.”

Moreover, adaptation activity is “unequally distributed across regions” of the world, partly because of “widening disparities” between the cost of adaptation and the funding available to make it happen.

The summary looks at the feasibility of climate adaptation options on land, oceans, and ecosystems, in urban and rural areas, in energy systems, and at the intersections with health and involuntary migration. But it concludes that some ecosystems have already reached the limits of their ability to adapt to climate change, and “with increasing global warming, losses and damages will increase and additional human and natural systems will reach adaptation limits.”