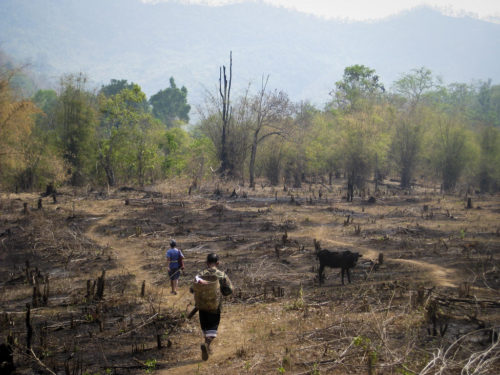 The world currently spends at least US$1.8 trillion each year—or 2% of global GDP—on subsidies that are driving ecosystem destruction and species extinction, according to a new study.

Fossil fuels, agriculture, and freshwater extraction account for 80% of these planet-killing subsidies, reveals the study commissioned by The B Team, a non-profit for human- and climate-centred business practices co-founded by British billionaire Sir Richard Branson and Harley Davidson CEO Jochen Zeitz.

The study is the first in more a decade to estimate the total value of environmentally harmful subsidies (EHS) across key sectors, the group says in a release [pdf]. In addition to providing a vehicle for profound, systemic environmental destruction by “perpetuating unsustainable levels of production and consumption,” it finds that harmful subsidies serve to worsen global inequalities.

Fossil companies are the largest recipients of environmentally harmful subsidies, at $640 billion per year, leading to land subsidence, climate change, and air and water pollution, the study finds.

Next, at $520 billion per year, is the agriculture industry, whose unsustainable habits and fallout include “soil erosion, water pollution, commodity-driven deforestation, greenhouse gas emissions, conversion of natural habitats and consequent biodiversity loss.”

Freshwater extraction and utilization subsidies come third, at $350 billion per year, funds that underwrite water pollution and ecosystem losses both on land and in the marine environment.

A further $155 billion per year in subsidies back unsustainable forest management practices.

The authors warn that a “lack of transparency and disclosure of subsidy flows between governments and recipients” means that “the total value of EHS is likely to be higher” than estimated.

“The unaccounted-for costs to society from environmental damages caused by subsidized activities can be equal to or much higher than the subsidies themselves,” they add.

“Redirecting, repurposing, or eliminating” these subsidies could help unlock the $711 billion needed each year to halt and reverse the nature loss by 2030, and offset some of the cost of reaching net-zero emissions.

“The destruction of nature threatens business interests, with over half of the world’s total GDP—$44 trillion—moderately or highly dependent on nature,” writes The B Team, laying out a business case for redirecting EHS. These subsidies “create major risks for businesses and investors, including distorting investment patterns and industry cost structures, masking operating or accident risks, and creating competitive barriers to environmental improvements,” they write.

“The research is clear,” said B Team Chair Jesper Brodin, CEO of Ingka Group, the holding company behind the IKEA furniture chain. “$1.8 trillion are spent every year into supporting the old system. We are in the most important decade when it comes to climate change and reversing nature loss and together, business and government, have an opportunity to reform and redirect these funds to accelerate a just transition for people and the planet.”

That statement appeared within days of a news exposé on IKEA’s failure to walk the climate talk with its “hunger” for Romania’s last old-growth beech forests.

“Environmentally harmful subsidies in business stand in the way of every effort to tackle climate change and protect our planet’s fragile ecosystems,” said Branson, the recent space tourist, entrepreneurial juggernaut, and B Team co-founder. “We must develop a deeper understanding of their devastating impacts and redirect our resources to the policies that help create a more sustainable future for all.”