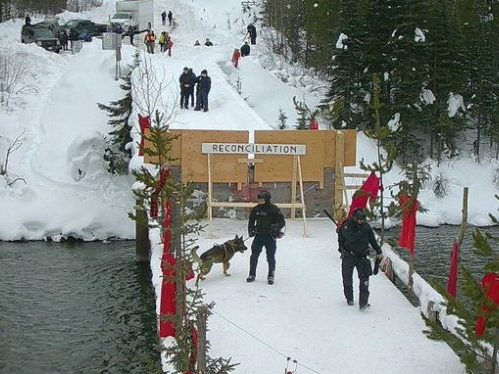 A hereditary chief of the Wet’suwet’en Nation is condemning a violent attack on a Coastal GasLink work site near Houston, British Columbia in the early hours of Thursday morning.

RCMP Chief Supt. Warren Brown, commander for the north district, called it a “calculated and organized violent attack that left its victims shaken and a multi-million dollar path of destruction,” The National Post reports. Wet’suwet’en Hereditary Chief Wihaliy’te (Theresa Tait-Day) said the nation was “disheartened” by the attack.

The news broke just days after Coastal GasLink said construction along the 670-kilometre line was delayed and would go “significantly” over budget.

“We certainly don’t, as a Wet’suwet’en people, condone this type of action,” Chief Wihaliy’te told Global News, adding that the nation doesn’t want people from elsewhere entering its territory to fulfill their own agendas. “Our feeling is that these are people from outside of province and we would like them to go home and leave the decision-making of these projects up to the Wet’suwet’en People. We don’t need their help.”

“We know we’ve had hard difficulties with Coastal GasLink in the past and we are not quite finished dealing with them,” she added. “However, as a nation, we need to start a healing process. We need to build our community, we should be looking for opportunities from industry, and we shouldn’t be fighting every opportunity that comes to our table for consideration.”

In a release Thursday, RCMP said they were called to the area following reports that a group of people, some allegedly armed with axes, attacked security guards and smashed vehicle windows, The Canadian Press reported. Police said when they tried to reach the work site they were stopped by a downed tree, tar-covered stumps, boards with spikes sticking out of them, and fires along the forest service road.

When officers tried to work their way through the debris, police say several people threw “smoke bombs” and flaming sticks, injuring one officer.

When police made it to the site, they say they found “significant damage” to heavy machinery, other equipment and portable buildings. A Coastal GasLink said there was an attempt by some of the attackers to set a vehicle on fire while workers were inside, but no one was injured.

The company said the confrontation occurred in the same spot where a blockade protesting the pipeline’s construction was set up last year for about two months, CP writes. But Global News writes that “there is no indication this attack is related to any previous protests at the site or about the pipeline.”

While members of the Gidimt’en Clan, one of five hereditary clans of the West’suwet’en, have been blockading the area, resulting in an extreme response last November from militarized police, the Clan “has said advance notice is provided to Coastal GasLink every time it plans to enforce an eviction,” Global says.

The pipeline has been at the centre of several protests and arrests, as Coastal GasLink obtained an injunction against the blockades and Wet’suwet’en hereditary chiefs issued the company an eviction notice, CP notes. In February 2020, First Nations and supporters across the country blocked major railways and highways in solidarity with the hereditary chiefs.

Wirzba declined to put a dollar value on the project’s cost overruns, though he said TC Energy is engaged in a “constructive dialogue” with LNG Canada right now to resolve the dispute. He said TC did not expect to suspend construction while those talks are under way.

But the news that Coastal GasLink was running behind schedule and over budget dates back at least to July 2021, when CP reported that the project could be delayed unless TC Energy and the multinational LNG Canada consortium could settle their ongoing dispute over project costs. In an emailed statement, LNG Canada said TC Energy had proposed cost increases and schedule performance that went “well beyond” what the two companies agreed to when LNG Canada made its final investment decision in October 2018, CP said at the time.

By November, the cost overruns had hit C$3.3 billion, CP wrote. Later that month, the Institute for Energy Economics and Financial Analysis (IEEFA) warned that LNG Canada, the biggest construction project in Canadian history, was on its way to becoming a “financial albatross” and “could be the last liquefied natural gas project built” in the province.

“Over the last three years, market shifts and policy changes have tested LNG Canada’s long-term economic viability,” IEEFA’s energy finance Canada analyst, Omar Mawji, said at the time. “This project could become a financial albatross for its sponsor investors, and it stands as a warning to other natural gas producers” involved with natural gas fracking projects in the Montney Basin in northeastern B.C.

Major segments of this report were first published February 15 and 17, 2022 by The Canadian Press.