U.S. Coastal Sea Levels Expected to Rise a Foot by 2050 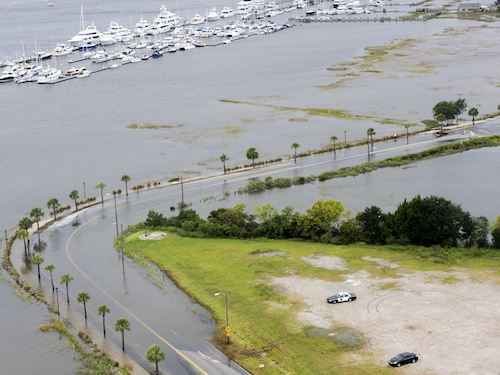 A new government report projects sea levels on U.S. coastlines will rise an average 10 to 12 inches by 2050, and the sea level increase over the next 30 years will equal that of the past century.

The economic impact of the rise will be substantial, as much of the American economy and 40% of the population are located near the coast, reports PBS News Hour. “Without additional risk reduction measures, U.S. coastal infrastructure, communities, and ecosystems will face significant consequences,” warns the report from NOAA.

Sea levels are rising as melting ice sheets and glaciers add to ocean volume, and as warmer ocean temperatures cause water itself to expand. Sinking land, currents, and water from ice melt will cause some coastlines to experience greater changes than others, and levels will be slightly higher in the U.S. than the global average, PBS says.

The biggest increases will be on the Gulf and East coasts, especially in Louisiana and Texas where waters will rise up to a foot and half by 2050. The Northeast will gain roughly 10 to 12 inches in that time frame, while the Hawaiian Islands and Southwest coasts can expect eight to 12 inches. The average increase by the end of the century will be around two feet, but the worst of the long-term sea level rise will be caused by melting ice sheets in Antarctica and Greenland and probably won’t kick in until after 2100.

“We can see this freight train coming from more than a mile away,” University of Wisconsin-Madison geoscientist Andrea Dutton, a specialist in sea level rise who wasn’t part of the federal report, told PBS. “The question is whether we continue to let houses slide into the ocean.”

Alarmingly, the past century—which saw the most dramatic rate of sea level rise in the last two millennia—is being used as a benchmark for the coming decades, says PBS. In another recent study, researchers found that the onset of modern sea level rise began in 1863 when the Industrial Revolution intensified, reports Phys.org.