‘Out of Control’ Trans Mountain Pipeline Will Cost $21.4B, Still Need Taxpayers to Back Private Investors 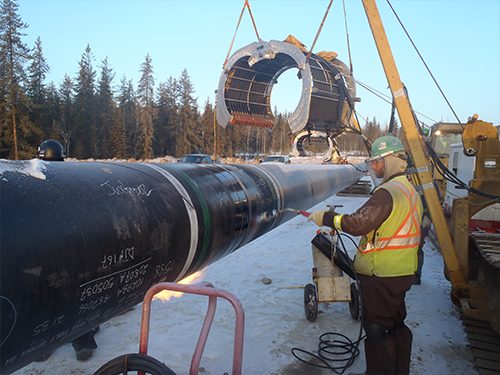 There’s virtually no chance private financiers will put up billions of dollars to complete the Trans Mountain pipeline without a federal loan guarantee, analysts say, despite Finance Minister Chrystia Freeland’s assurance Friday that “no additional public money” will be invested in a project whose cost has now ballooned from $5.4 to $21.4 billion.

That means taxpayers will still be on the hook for the success of a project whose official cost has increased 70% since the last estimate in February 2020, the analysts warn, with further increases already easy to foresee.

In a Friday afternoon statement tacked on to a speech about financial measures against the illegal blockade in downtown Ottawa, Freeland reacted to Trans Mountain Corporation (TMC)’s announcement earlier in the day that the cost of the pipeline has risen from C$12.6 to $21.4 billion over the last two years, and “mechanical completion” of the project is delayed until the third quarter of 2023.

Trans Mountain blamed the increases on “project enhancements, changes, delays, and financing,” including the impacts of the COVID-19 pandemic and the devastating floods that swept British Columbia in November.

Trans Mountain also announced that its president and CEO, Ian Anderson, will retire in April.

Freeland said she wanted to “assure Canadians that there will be no additional public money invested in TMC,” adding that the Crown corporation “will secure necessary funding to complete the project through third-party financing, either in the public debt markets or with financial institutions.”

She cited advice from investment bankers BMO Capital Markets and TD Securities “that public financing for the project is a feasible option that can be implemented swiftly. They have also confirmed that the project remains commercially viable.”

Independent analysts say the pipeline was a losing venture when Ottawa bought it from Houston-based Kinder Morgan for $4.5 billion in 2018, and adding that purchase price to the rising cost of construction puts the total closer to $26 billion.

“This was a really expensive gift” to oil and gas companies, Omar Mawji, energy finance Canada analyst at the Institute for Energy Economics and Financial Analysis, told The Energy Mix Sunday. “It’s not even a subsidy. It’s a bailout.”

“The Trans Mountain project is out of control, and Canadian taxpayers are facing an even greater burden than before,” independent economist Robyn Allan, a former president and CEO of the Insurance Corporation of B.C., wrote in an email. “Not only is the $21.4 billion estimate a 70% increase in the project’s budget—giving a clear indication of just how badly it’s being managed—it’s not likely to be the last increase we will see.”

“This latest increase confirms our analysis of last year, but we take no pleasure in being right this time,” wrote Eugene Kung, staff lawyer at West Coast Environment Law. “The new price tag—four times the original estimate—means that TMX’s already collapsed business case is worse than ever, and the cost will probably increase further.”

Kung said the government had extended $9.6 billion in credit to the pipeline as of December 31.

“It is outrageous that TMX’s cost has nearly doubled in two years with very little oversight,” he wrote. “Especially since the so-called economic benefits were used to justify the infringement of Indigenous rights, the significant climate impacts of building oil and gas expansion infrastructure, and the devastating effects on wildlife like salmons and orcas.”

A Private Investment Backed by Taxpayers

In her statement, Freeland said the federal government would put no more public funds into Trans Mountain Corporation, but her phrasing didn’t rule out other forms of support that don’t flow directly into the Crown corporation’s coffers. Mawji said no private investor would back such a risky project without the government guaranteeing the deal.

“They’re just using word play when they say this is an attractive investment for a private investor,” he told The Mix. “It’s attractive if there’s a guarantee from Canada, from the government.” Otherwise, “you’re not likely to see someone come in with equity to invest in the project.”

Even at $12.6 billion, “they still didn’t think this project was going to make money for them,” he added. At $21.4 billion, “it just goes out the window,” and “it’s hard to see how they recoup that money”.

The last time a Canadian government issued a loan guarantee for a pipeline, the big loser was the Alberta treasury, after Premier Jason Kenney offered up to $8 billion in financial aid to get construction started on the Keystone XL pipeline. Now, the province says it’s out $1.3 billion and the Kenney government is pursuing trade sanctions, after U.S. President Joe Biden kept his promise and cancelled Keystone on his first day in office.

Mawji said Trans Mountain isn’t quite as risky as that, since construction is now about 50% complete and the project has “a tonne of support” from oil and gas companies. But “if there are further delays, if there are further events that push costs up or delay the project in its entirety, then it’s difficult,” he said. “At a certain point, the economics don’t make sense,” with a pipeline that could never be resold or recover its costs.

Finance Canada officials had not responded to a series of email questions from The Mix as this story went to virtual press Sunday evening.

More Costs on the Horizon

If the government does line up the new investment it needs, the next round of cost increases will begin with the $700 to $800 million per year in interest costs the project will incur because of the $21.4-billion price tag, Mawji said. And Allan pointed to a key term in the Trans Mountain Corporation announcement—“mechanical completion”—as a hint at where the pipeline will run into another round of new expenses.

While “mechanical completion” means most of the construction work on a pipeline is complete, she explained, it will take months after that for the project to receive Canada Energy Regulator (CER) permission to start operations. During that time, financing costs will continue to pile up, and work might continue on unfinished items, like a third dock at the Westridge Marine Terminal in Burnaby.

“They’ve still got a bunch to do, including regulatory approval, that can take a significant amount of time,” Allan said, so it’s curious that Trans Mountain’s media release now refers to “mechanical completion”, rather than the in-service date. “That’s a sleight of hand,” she said. “It’s a change of phraseology. People think it means the same thing, but it doesn’t.”

The bigger question, she told The Mix, is who’s meant to be paying for the pipeline.

A Sweet Deal for Fossil Producers

Oil and gas pipelines are supposed to cover their costs with toll charges paid by the fossil producers that use them. Back when Trans Mountain was expected to cost a mere $6.8 billion, average tolls for its customers in Alberta and British Columbia were set at $5.17 per barrel, Allan explained, and they were supposed to increase by 7¢ for every $100 million in additional capital cost.

On that basis, a $21.4-billion project should mean tolls in the range of $15 to $16 per barrel of oil, a price that Mawji said would likely push fossils to seek less expensive options.

But that’s not the way Trans Mountain’s contracts with its shippers are written. Under those agreements, “approximately 2/3 of cost increases will not be passed on to shippers,” Allan said. So “instead of about $16 per barrel to ship on the pipeline, oil companies will be paying about half that, or approximately $8 per barrel. No wonder the oil companies are not up in arms about the budget overrun. It has relatively little impact on them.”

The cost difference will have to be covered by Trans Mountain Corporation, or its private financiers—or, with a loan guarantee, the Canadian taxpayers backstopping the project.

And indeed, a parade of fossil executives expressed their continuing confidence in the project when the Calgary Herald first reported on the upcoming cost increase earlier this month. They continued with more of the same after Friday’s announcement.

“While no one wants to see cost increases, they are often a fact of life with projects of this size, and in this case were largely beyond Trans Mountain’s control,” Cenovus Energy President and CEO Alex Pourbaix told the Globe and Mail in an email. “Getting this pipeline built will provide a significant boost to the Canadian economy while helping to solidify investor confidence in our oil and gas industry.”

Suncor Energy President and CEO said TMX remains “vital to Canada’s long-term economic success and energy security,” even though he was disappointed by the latest news on the project.

But Mawji said he could think of better ways for the government to invest $20 or $30 billion, before even looking at all the possibilities in energy efficiency and renewable energy. “If you really wanted to help the fossil fuel industry, $30 billion to help them invest in the energy transition would be substantial for them,” he said. “So that’s my question: Why is the pipeline that necessary? But now that it’s 50% built, I guess it would be very embarrassing for them to reverse it now.”

Kung pointed to an Abacus Data poll last fall that found 59% of Canadians opposed to spending any more than $12.6 billion on the project, and only 7% willing to see it soak up more than $20 billion in public funds.

‘Everything Old Is New Again’

“Everything old is new again, so we’re back where we were in 2018, before the feds backed this pipeline,” he said. “The project is taking on financial water and has a questionable market, and they’re out there looking for private funding that just doesn’t seem to be interested in this kind of project anymore.”

But much has changed in the last four years, Biggs added.

“Since then, the CER issued an Energy Futures report that seemed to suggest this project might not be needed, the International Energy Agency basically said no new pipelines are needed if we tackle climate change, and the Intergovernmental Panel on Climate Change said we have to stop these kind of projects if we want any chance of getting control of the climate emergency. So the case for this pipeline has gotten much, much worse since it was last looking for private financing.”