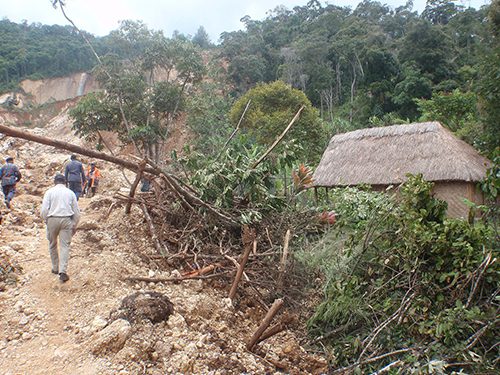 As Brazil mourns the more than 120 people killed and nearly as many missing after mudslides hit the mountain city of Petropolis, experts are warning that the country’s land use policies are severely deficient in the face of extreme weather.

Nearly 120 Petropolis residents remain missing after the mudslide. Almost 400 have been left homeless.

“Rain is the great villain, but the main cause is poor land use. There’s a total lack of planning,” professor Antonio Guerra of the Federal University of Rio de Janeiro told The Associated Press after dozens of hillside houses were demolished in the heaviest rainfall registered since 1932.

More than 1,500 people have died in similar landslides in recent decades in that portion of the Serra do Mar range. There have been more than 400 deaths from heavy storms in Petropolis alone since 1981, reports AP.

That’s largely because inadequate planning has led to a “haphazard sprawl” as the city draws newcomers from poorer regions, the news agency adds. “Mountainsides are now covered with small homes packed tightly together, constructed by people who are not fully aware of the dangers. Many have built without proper permissions because they cannot afford to do so elsewhere.”

Some of the dangers include deforestation in reaches above the tight-packed homes, as well as inadequate drainage, Guerra told AP. People forget where slides have taken place and return and rebuild, he added.

Removing residents from existing homes is unpopular politically, the news story states, plus there is often nowhere to relocate residents, with little available space in Petropolis for new, safe construction. The Brazilian daily Folha de S Paulo reported that the state government has spent less than half of the money earmarked for its disaster prevention and response program.

While heavy rains are typical in the region, especially during the Southern Hemisphere’s summer between December and March, experts say downpours are getting more intense. And climate change acts to increase the frequency of extreme weather events, said Marcelo Seluchi, a coordinator at Brazil’s National Centre for Monitoring and Early Warning of Natural Disasters. “We are clearly observing this.”

A weather phenomenon called a “sting jet” may lie behind the “recent spate of dangerous wind storms in the region, write climate scientist Hayley J. Fowler and postdoc Colin Manning from Newcastle University, in a guest post for The Conversation.

First discovered in 2003, sting jets are “a small, narrow airstream that can form inside a storm and produce intense winds over an area smaller than 100 kilometres,” they explain. The phenomenon can last anywhere between one and 12 hours.

“Difficult to forecast and relatively rare,” sting jets form inside extratropical cyclones, and are particularly dangerous because “they can produce much higher wind speeds on the ground than might otherwise be forecast by studying pressure gradients in the storm’s core alone,” according to the post.

Sting jets will “have a significant influence on the UK’s weather in a warming climate,” Fowler and Manning write. “Our high-resolution models predict more intense wind storms over the UK as climate change accelerates, with much of this increase coming from storms that develop sting jets.”

While global climate models currently suggest only small increases in the number of extreme cyclones, they add, these models “fail to represent sting jets and poorly simulate the processes that cause storms to build,” meaning that they “probably underestimate future changes in storm intensity.”

U.S. Coastal Sea Levels Expected to Rise a Foot by 2050