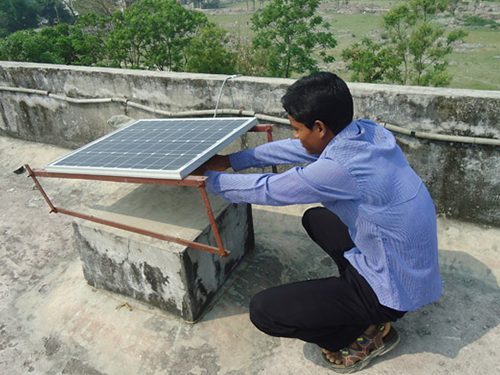 Lifting hundreds of millions people out of “extreme poverty” would increase global emissions by less than 1%, says a study just published in Nature Sustainability.

The new research confirms the striking emissions inequality between rich and poor countries, with an average person in sub-Saharan Africa producing 0.6 tonnes of carbon dioxide per year, compared to an average American’s annual footprint of 14.5tCO2.

The authors found that the average carbon footprint of the world’s top 1% of emitters—some 500,000 super-rich individuals—was more than 75 times higher than among the bottom 50%.

“The inequality is just insane,” lead author Benedikt Bruckner, a master’s student at the University of Groningen, told Carbon Brief. “If we want to reduce our carbon emissions, we really need to do something about the consumption patterns of the super-rich.”

“We often hear that actions taken in Europe or the United States are meaningless when compared to the industrial emissions of China, or the effects of rapid population growth in Africa,” added Dr. William Lamb, a researcher from the Mercator Research Institute who was not involved with the study. “This paper exposes these claims as wilfully ignorant, at best”.

The study uses what it calls “outstandingly detailed” global expenditure figures from the World Bank Consumption Dataset from 2014. That source gave them direct access to heating and cooling expenditure data, plus data on carbon emissions embodied in the products people purchased. “So it’s taking account of the entire global supply chains to calculate those carbon emissions,” said co-author Klaus Hubacek of the University of Groningen.

Using consumption data links emissions to the countries that utilize goods and services, rather than the countries that produce them, added co-author Dr. Yuli Shan, also from the University of Groningen. This is important because “poor countries emit large quantities of CO2 due to the behaviour of people in developed countries,” he added.

In 2014, more than a billion people were living below the extreme poverty line of US$1.90, say the authors. “Extreme poverty” was mostly concentrated in Africa and south Asia—where per capita CO2 emissions are generally the lowest.

“Carbon inequality is a mirror to extreme income and wealth inequality experienced at a national and global level today,” the study says.

Eradicating “extreme poverty”—by raising everyone above the US$1.90 per day threshold—would drive up global carbon emissions by less than 1%, the study concludes. “Nevertheless, carbon emissions in low- and lower-middle-income countries in sub-Saharan Africa can more than double as an effect of poverty alleviation.”

Report Suggests Path to Phase Out Canadian Fossil Subsidies by 2023