Disinformation, Extremism Make Climate Action Tougher Than It Should Be: McKenna 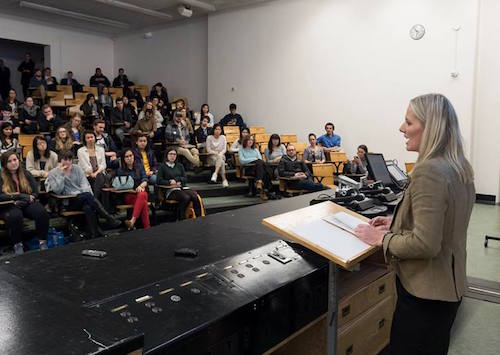 With the last vestiges of a three-week occupation gradually clearing out of downtown Ottawa, and at least one key convoy organizer showing up in court wearing an “I ❤️ Oil and Gas” hoodie, a former federal environment minister is pointing to parallels between two of the urgent, science-based issues the country faces—the pandemic and the climate emergency.

“On the negative side, we’re seeing the role of disinformation. We see it on climate. We’ve seen it about vaccines,” said Catherine McKenna, who served as environment and climate minister from 2015 to 2019 and took waves of vitriolic abuse for her efforts.

“Folks may be wondering why I’m tweeting up a storm about what’s going on in Ottawa,” she told The Energy Mix in an interview last week. “It’s because I worry about democracy. We’re not going to get climate action unless we have a government that represents the people who are demanding that action.”

“We really treated COVID like a crisis,” she said. “We looked at the science. We thought maybe there would never be vaccine. But we did it at Mach speed. There’s still vaccine inequity, as there is in the climate world. But at some point, because of science and vaccines, we’re going to be able to emerge from this. We supported people through it, and we invested a lot more money than anyone thought we could to keep people safe and keep businesses alive.”

With an equivalent response to climate change, “treating it as a real crisis, focusing on the science, working together, and supporting people and businesses through it, we would be able to tackle it. There would be no doubt.”

Asked whether the political extremism fueling the occupation will be fed by climate disruption, McKenna said the politics around climate action shouldn’t be so difficult.

“It’s a huge problem,” she said. “I wish everyone just agreed on the science, that [the climate emergency] is having a real impact, and we need to support people” through the transition off fossil fuels.

“But unfortunately, we’ve seen that some folks for their own purposes have made this a polarizing issue. As if you have extreme views if you want to put a price on pollution.” She recalled that when she visited groups of Grade 4 students as environment minister and asked whether it should be free to pollute, 100% of them said no.

“There are things we should just be able to agree on,” McKenna said. “But political polarization has resulted in things that shouldn’t be controversial being used as lightning rods to ignite a base.”

At The Mix, we’ve been following the web of wacky conspiracy theories that motivated much of the political action behind the occupation, including a 15-page “memorandum of understanding” by which organizers apparently expected Governor General Mary May Simon to dissolve a duly-elected government…just because they said so. We asked McKenna what climate communicators can do to help stop more people from falling down that particular rabbit hole.

“You have to talk like real people talk,” she replied. “Sometimes it’s very challenging for people who’ve been deeply steeped in the environmental community. But there’s a lot of jargon, and it’s alienating.”

And those plainspoken messages need to get out farther, wider, and by different channels.

“One of the challenges is that writing op eds in newspapers is not going to reach most people, or even a small minority of people, and they will probably be people who are already convinced of their views, one way or the other.” McKenna listed religious communities, health professionals, and youth talking to their parents and grandparents as groups that are figuring out how to “reach people in a very different way”.

She cited the federal just transition task force, formed in 2018 to support communities affected by the country’s 2030 coal phaseout, as a successful effort to reach out and listen.

“Let’s be 100% clear that when you talk about coal phaseout, you can’t abstract it,” she said. “You’re phasing out jobs, and it’s the only game in town.”

That means “we need to have empathy, and not vilify folks, because we’ve all benefited and continue to benefit from the burning of fossil fuels. It’s only more recently that we realized just how bad they were for the planet. But we have benefited.” So while “I’m happy to hold companies responsible” for their emissions, it’s “absolutely reasonable” for people whose jobs are in jeopardy to make it their first priority to put food on the table.

When the task force visited coal communities, as many as 600 people would fill local gyms for the meetings, McKenna recalled. “People were angry, and people were sad, and people were scared,” she said. “But they were also really happy that someone came and listened to them and explained what was going on.” The meetings gave people a chance to talk about what they needed or wanted next, whether it was early retirement, job retraining, or infrastructure investments—all of which a federal government can provide.

“It’s incumbent on government to actually work to make sure that tackling climate change isn’t a penalty on a few, so that everyone is part of the solution,” she said.