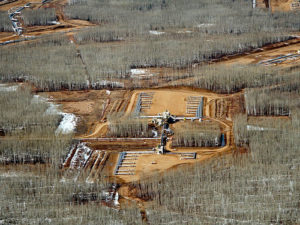 Alberta will toughen its emissions standards and close a loophole that would have allowed tar sands/oil sands companies to gain financially from their emissions.

Some of Canada’s highest greenhouse gas (GHG) emissions come from tar sands/oil sands mines and upgrading facilities because of the energy it takes to separate bitumen from sand and clay deposits. And yet those activities collectively generated 2.4 million provincial emissions performance credits in 2020 and were required to pay for only 700,000 of them, reports Reuters.

At roughly US$32 per credit, the 1.7 million remaining credits were worth about C$54.5 million to the companies. But two sources told Reuters that Alberta’s emissions system, the Technology Innovation and Emissions Reduction Regulation (TIER), was not intended to provide credits to tar sands/oil sands mines. Now, mines and upgraders will no longer benefit financially from their emissions when they account for their 2021 performance later this year, the sources said.

Alberta also allows large emitters to choose whether to measure their emissions intensity against their past performance or an industry benchmark. This is “fundamentally a problem,” said environmental economist Dave Sawyer, though the province is updating the benchmarks that set emissions reduction requirements per unit of production for mines and upgraders.

“A facility can show some continuous improvement and gain credits, but still be a high emitter and be a relatively poor emissions performer from its peers,” Sawyer explained. Though emissions per barrel are steadily declining as operators adopt new technology, total emissions continue to rise as production grows.

The loophole was “ludicrous,” said Équiterre climate policy analyst Émile Boisseau-Bouvier, but the solution doesn’t address the problem. “Alberta must reduce its absolute emissions, not its relative emissions,” he said.

Canadian provinces can choose between participating in the federal carbon trading system or designing an equivalent one. Though Ottawa has deemed Alberta’s TIER equivalent, the new changes may be responding to growing pressure for the province to raise its standards. Provinces are expected to strengthen their criteria alongside the federal government when it does so in 2023, says Reuters.