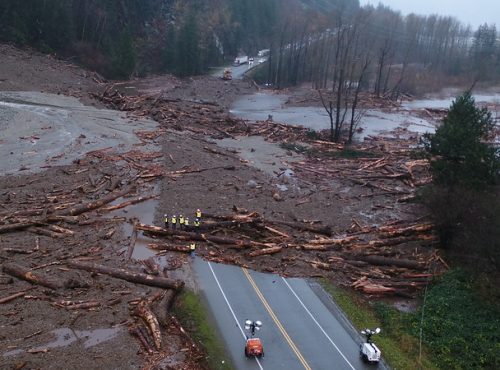 Atmospheric rivers as powerful as the one that devastated British Columbia in November are 60% more likely to occur due to human-induced climate change, a new study concludes.

The 48-hour deluge that the storm delivered to major parts of the province was made 50% more likely by anthropogenic climate change, according to a preprint of the study, co-authored by scientists at Environment and Climate Change Canada and the University of Victoria’s Pacific Climate Impacts Consortium.

Using “a large ensemble of simulations” that integrated “multiple climate drivers,” the researchers estimated that the extreme “stream flow events” experienced in several mountain basins in the province while caught up in the atmospheric river were between two and four times more probable, depending on the basin, due to human induced-climate change.

The study has not yet been peer-reviewed.

Despite its monstrous impacts, the atmospheric river was “not unprecedented” in size, the research shows. Based on the amount of water vapour it contained, the atmospheric river was “about a one in 10 year event,” the research team estimated. But based on the amount of rain it ultimately delivered, the deluge “was found to be substantially more extreme, approximately a one in 50 to one in 100-year event.”

With peak stream flow (the volume of water in streams and rivers as well as surface runoffs) taken into account, the atmospheric river “exceeded one in 100-year events in several basins.”

The “very high precipitation during the event was the primary driver” of that extreme stream flow, the research team found, but “snowmelt associated with a rapid rise in temperatures during the event also made a significant contribution over most basins.”

The researchers dismiss concerns that loss of topsoil stability due to wildfire may have contributed to the extreme stream flows. “The small fraction of most basins in the region which burnt in recent years, including the Sumas River and Coquihalla River basins, preclude wildfire having been a primary driver of the event’s impacts,” they write.

The authors warn that “the probability of such events is expected to increase further in the future, demonstrating the importance of developing increased resiliency to such events here in B.C., and across the world.” November’s atmospheric river and its associated impacts produced an estimated C$450 million in insured losses, a measure that leaves out uninsured impacts as well as immeasurable losses of life, they note.