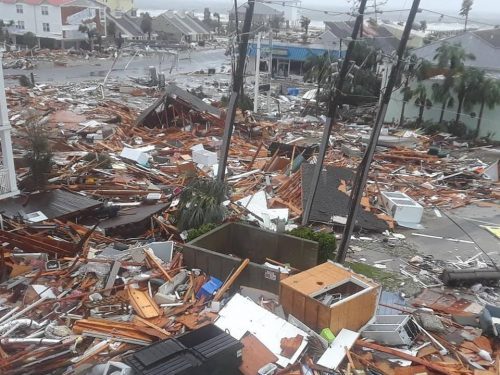 Scientists and governments began meeting Monday to finalize a major United Nations report on how global warming disrupts people’s lives, their natural environment, and the Earth itself. Don’t expect a flowery valentine to the planet: instead an activist group predicted “a nightmare painted in the dry language of science.”

The UN’s Intergovernmental Panel on Climate Change (IPCC), a collection of hundreds of the world’s top scientists, issues three huge reports on climate change every five to seven years. The latest update, which won’t be finished until the end of February, will explain how climate change already affects humans and the planet, what to expect in the future, and the risks and benefits of adapting to a warmer world.

“We’re concerned that the physical climate around us is changing,” panel co-chair Debra Roberts, a South African environmental scientist, told The Associated Press. “But for most people in their day-to-day lives… they want to know: so what? What does it mean for their lives, their aspirations, their jobs, their families, the places where they live.”

The report features seven regional chapters “about how physical changes in the climate change people’s lives,” she said. And she said it will have a strong emphasis on cities.

Even without seeing the final report, activists call it a warning sign for the planet.

“The IPCC’s horrifying evidence of escalating climate impacts is set to show a nightmare painted in the dry language of science,” Teresa Anderson, who heads climate justice issues at ActionAid International, said in a statement.

Scientists won’t yet say specifically what’s in the report because its critical summary is still subject to intense negotiation between the authors and governments over next two weeks, with consensus needed for the final version. Drafts that have circulated publicly will be changed, sometimes dramatically, before it is publicly released on February 28.

Last August, the first of the three reports, which prompted the UN to declare “code red” on the climate emergency, outlined the physical science of climate change. A third report due in March will be more about what can be done to curb and adapt to global warming.

Without getting into specifics, report co-chair Hans-Otto Poertner said the science is clear that there are limits—including temperature limits—to what key ecosystems, species, and humans can withstand. In some places, warming is near those limits, and in a few cases, such as much of the world’s coral reefs, have even passed them.

“We are losing living spaces for species and for ourselves, as well,” Poertner, a German biologist said in a press briefing last week. “Because with climate change, some parts of the planet would become uninhabitable.”

The report will also address ways to adapt to an ever warming world, including how some technological fixes may have unwanted side effects.

“In some countries in the Northern Hemisphere, there has been an assumption (of) `Oh, well, if we cannot control climate change, we just let it go and we adapt to it. So we adapt out of the impacts of climate change’,” Poertner said. “And this is certainly a very illusionary approach.”

Environmentalists argue that the extreme weather already seen in parts of the world in recent years shows how urgent it is for governments to address the rising cost of climate change.

“The forthcoming IPCC report will confirm what we already know about the crushing toll of heat waves, drought, floods, storms, wildfires and ocean acidification for people and critical ecosystems,” said Rachel Cleetus climate and energy policy director at the Union of Concerned Scientists. “This comprehensive scientific assessment will underscore how much worse the climate crisis is likely to get if we fail to take bold global action.”

Poertner warned of “tipping points” and a risk of mass extinction like the one that did away with Earth’s dinosaurs.

Speaking at the opening of the meeting being held largely online with only a small physical gathering in Berlin, the head of the UN weather agency said that it was important to consider the impact that talk of climate apocalypse could have on people’s mental well-being.

“We have to be also a little bit careful how we communicate the results of our science, tipping points, and whether we talk about the collapsing of the biosphere and the disappearance of mankind,” said Petteri Taalas, secretary-general of the World Meteorological Organization. “We have to be careful with that, not to cause too much fear among the young people. That fear should be targeted towards decision-makers.”

These reports—which earned the science panel a Nobel Peace Prize in 2007—are used when governments meet every year to negotiate how to curb climate change.

Germany’s science minister, Bettina Stark-Watzinger, said getting governments to sign off on the summary is key to concerted political action.

“We need to take everyone with us,” she told AP. “That’s why we need to translate the findings and discuss them internationally.”

Roberts, the panel’s co-chair, made clear that the message to policy-makers is likely to be stark.

“You need not just incremental change,” she said at a United Nations Foundation briefing last week. “You need systemic change.”

This post by The Associated Press was first republished by The Canadian Press on February 14, 2022.