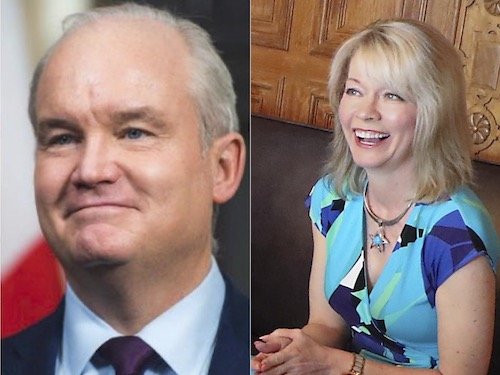 The federal Conservative Party under interim leader Candice Bergen is dropping its commitment to a consumer price on carbon, just as a small band of conservative opinion-makers set out to convince their peers that climate policy matters.

At the Conservatives’ weekly caucus meeting last Wednesday, Bergen said the party “will stick to its official position against federal carbon levies,” the Toronto Star reports, until the matter can be debated during the Tories’ upcoming leadership campaign.

“We believe that there should be no federally imposed carbon taxes or cap and trade systems on either the provinces or on the citizens of Canada,” the party’s policy book states. “The provinces and territories should be free to develop their own climate change policies, without federal interference or federal penalties or incentives.”

The move to reaffirm that position “came as Bergen seeks to reunite a team rent asunder under the leadership of Erin O’Toole, who those same MPs ousted last week,” the Star writes.

“O’Toole’s embrace of carbon pricing had marked a major shift in party policy—the Conservatives have long opposed carbon levies and O’Toole had run for the party’s leadership promising to scrap what Tories referred to as the federal ‘carbon tax’,” the news story recalls. “But in a bid to put forward a climate change plan that would be seen as credible, he pivoted after he won and promised that an elected Conservative government would introduce a consumer price on carbon.”

That was after the last party convention rejected a motion to recognize that climate change itself is real.

Just a day after last week’s caucus meeting, a self-described group of long-time Conservative Party “activists, advisors, and members” launched Conservatives for Clean Growth, declaring it “critical for the Conservative Party of Canada to have a credible plan on the environment,” the Globe and Mail writes. The effort is co-chaired by former federal cabinet minister Lisa Raitt and ex-Alberta minister Jim Dinning. Its executive director is Ken Boessenkool, a former campaign strategist to ex-PM Stephen Harper.

“It’s an effort that should be welcomed by anyone concerned that the Tories—by far the likeliest party to form government whenever Canadians turn from Justin Trudeau’s Liberals—might be set to turn their backs on the country’s emissions reduction goals, and on efforts to compete economically in a decarbonizing world,” writes Globe columnist Adam Radwanski.

“But the nascent organization may not have an easy time convincing party members themselves to embrace climate ambition,” he adds. O’Toole’s push in that direction was one of the factors contributing to his abrupt dethroning as Tory leader last week, and the group’s website so far provides only a “brief and cautious” policy vision and very few names of its participants.

That’s “a possible sign,” Radwanski says, “that other Conservatives are wary of the same sort of backlash Mr. O’Toole faced.”