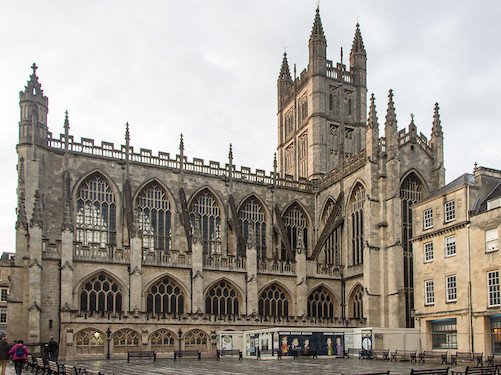 Bath Abbey—a tourist site and a place of architectural, cultural, and spiritual significance in England—could cut its annual carbon dioxide emissions by 10 tonnes and meet 35% of its electricity needs by installing solar panels, making it just one example of how decarbonization can help cut costs for historic buildings that usually have poor energy efficiency and disproportionately high demand, researchers say.

“It’s very difficult to insulate historic Grade I listed buildings like Bath Abbey, so installing solar panels is a good way to reduce the carbon footprint of these buildings,” said Matthew Smiles, a PhD researcher at the University of Liverpool and first author of the study. “Most of the abbey’s electricity is used during the day, when the solar panels would be generating energy from sunlight, making it an ideal building to implement them.”

In consideration of the building’s historical importance, the researchers based their calculations on an approach that minimized visible impacts by positioning panels where they would not be obvious from the street. Historic England, the public body that monitors England’s heritage sites, said there will have to be careful planning and approval before taking steps to make the abbey more eco-friendly. The organization was not involved in the study and was not made aware of any plans to install panels on the abbey’s roof, says the Daily Mail.

Beyond reducing the abbey’s emissions, the study concluded that a solar installation could have wider impacts—from encouraging solar development in the neighbourhood, to triggering public resistance to aesthetic compromises.

“Some may argue that there would be a public backlash to installing the photovoltaic (PV) systems as it would spoil the aesthetic of the Abbey, a problem tackled by many of the churches that have installed their own PV systems,” the researchers wrote. So “an important next step would be to consult residents of the area, the local authority, and conservation officer on the issue.”