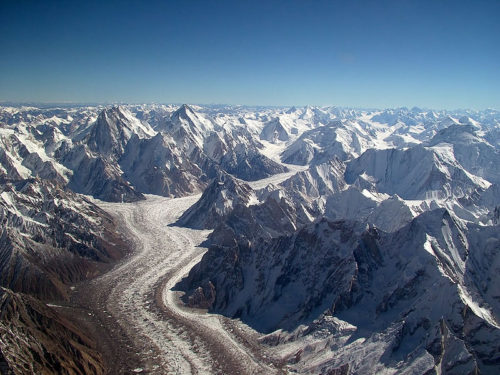 A groundbreaking study has found that majority of the Earth’s glaciers contain less ice than previously thought, boding ill for the millions of people who depend on the icefields for drinking water, irrigation, and power generation.

Covering 98% of the Earth’s glacier cover, and including ice masses that had never before been mapped, researchers from France’s Institute of Environmental Geosciences (IGE) and Dartmouth College’s Ice Future research group did find one spot of brighter news: the Himalayas hold 37% more ice than previously thought, with glacier water reservoirs being correspondingly larger.

In the upper Indus and Chenab basin, home to some eight million people, glacier water reservoirs were measured to be between 17 and 31% larger than previously calculated. In the less-populated Brahmaputra River basin, they were 30 to 87% larger.

The revised understanding of Andean glaciers is particularly grim, with ice fields found to be 27% less in volume than previously thought, while freshwater resources are almost one-quarter smaller.

That’s very bad news for the 2.2 million residents of La Paz, Bolivia, who depend on Andean ice melt for “up to a third of their water supply in dry months,” the study states. It thus “seems inevitable that the reduced total reservoir of ice… will have an impact sooner than anticipated.”

Lead author and IEG post-doc Romain Millan told Bloomberg he hopes policy-makers will use his team’s new methodology to “anticipate the effects of climate change on glaciers and water supplies.”

The revised estimate reduces global sea level rise by three inches if all glaciers were to melt, says Reuters.

Elsewhere, University of Maine glaciologists have found that the South Col Glacier on Mt. Everest has lost more than 54 metres (180 feet) of ice thickness since the late 1990s. “The glacier, which sits around 7,906 metres (25,938 feet) above sea level, is thinning 80 times faster than it first took the ice to form on the surface,” reports the BBC.