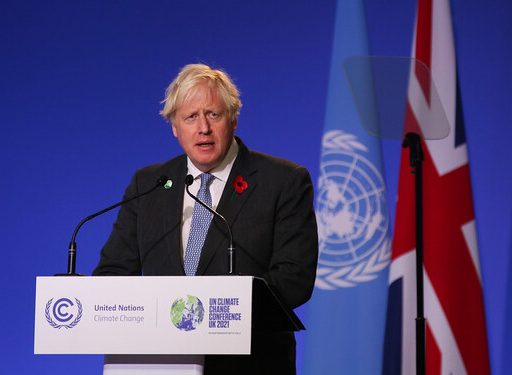 The Boris Johnson government in the United Kingdom is neglecting science and will “torpedo climate action” if it follows through with plans to approve six new oil and gas fields in the North Sea, advocates say.

“This would represent a stunning retreat from the pro-climate posturing we saw from the government at the COP 26 climate summit in Glasgow,” said Greenpeace UK oil campaigner Philip Evans. “[Chancellor of the Exchequer] Rishi Sunak’s climate-busting drive for fossil fuels is clearly against the spirit of that declaration and against the demand of the British people that climate is a top matter of concern.”

Sunak has said he wants to encourage more investment in new fossil fuel drilling, reports The Independent, claiming the UK needs natural gas as part of its net-zero transition. His sentiments were echoed by a Department for Business, Energy and Industrial Strategy (BEIS) spokesperson, who said that “turning off our domestic source of gas overnight would put energy security, British jobs, and industries at risk, and we would be even more dependent on foreign imports.”

[That comment came with the UK in the grip of skyrocketing home energy costs that won’t be solved by new oilfield approvals—and no one is suggesting a complete shutdown of fossil fuel production overnight.—Ed.]

Climate advocates say UK policy ignores warnings from climate scientists and the findings of organizations like the International Energy Agency, which called for no new investment in oil, gas, or coal development and a massive increase in renewable energy adoption in its May, 2021 Net Zero by 2050 report. Downing Street has confirmed that six applications for extension of North Sea drilling are currently under consideration, but said they all relate to oil and gas fields that were licenced in the past—some as long ago as the 1970s, writes the Independent. The proposals will undergo environmental impact assessments and public consultations, a Johnson spokesperson said, and “no decisions have been taken” as yet.