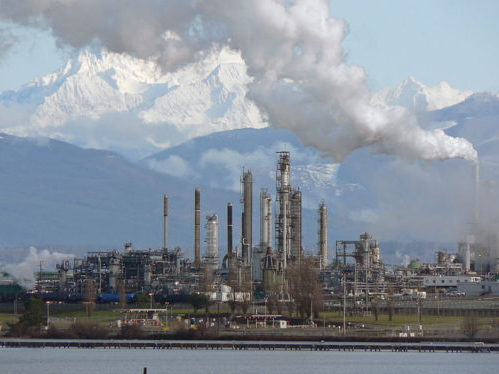 Nearly three-quarters of Canadians believe fossil fuel companies should definitely or probably be held accountable for their environmental impacts, according to a Politico-Morning Consult survey of 1,000 people in each of 13 countries.

The poll also found that many Canadians are taking fewer flights out of concern for the climate, with 37% saying they fly less now that the climate crisis is on their radar, Politico reports.

But the poll results still pointed to a sharp rift in Canadians’ views on the climate emergency, with large majorities of Green, NDP, and Liberal Party supporters declaring it a top or moderate concern, but 20% of Conservative and 45% of People’s Party of Canada supporters professing no concern at all.

“With the federal Conservatives in the throes of another federal leadership race, expect debate over climate policy to get heated,” the U.S.-based publication adds via its Canadian edition. While former Tory leader Erin O’Toole’s effort to win his party over to a carbon price was a “strategic push toward the centre to cleave votes from disenchanted Liberals,” the news analysis says, the future leader may well swing to the hard right and away from climate action, in an effort to draw votes away from farther-right People’s Party leader Maxime Bernier.

Among Conservatives inclined to see the climate crisis as something of a problem, 37% said they were “somewhat concerned,” with another 18% declaring themselves “not too concerned.” By contrast, 90% of NDP voters, 84% of Green Party supporters, and 81% of Liberals declared themselves very or somewhat concerned about climate.

Asked which entity they believed had the “most power to combat climate change,” 21% of Canadian respondents named the federal government, 19% cited private companies, and a further 15% said individuals. International institutions got the nod from 13% of those polled, followed by banks and other financial institutions at 4%.

The poll revealed that Canadians are far more willing than Americans to ban coal, with 50% of Canadian respondents saying they want to see the dirtiest fossil fuel phased out, compared to 28% of Americans. Americans are also more polarized than Canadians in their attitudes towards the climate crisis, Politico says, with 97% of left-leaning voters in the U.S. expressing concern about climate change, compared to 51% of right-leaning voters.

Those left-leaning Americans are unhappy with President Joe Biden’s track record on climate action, with 80% saying the administration “is doing too little to address climate change.”

Yet beyond the borders of North America, concern about the climate crisis bridges the ideological divide.

Respondents from other countries polled —including Australia, France, India, Japan, Russia, South Africa, and the UK—were also asked whether they thought their countries were doing their fair share to tackle climate change. In India, 70% of respondents said they thought their country was holding up its end of things very well, compared to only 33% of Japanese polled.

“The close alignment of Indian government policy and Indian public opinion is an ominous sign for those campaigning against coal use,” Politico writes, though analysts closer to the ground have a sharply different view.

“Respondents in South Africa expressed a deep concern and dissatisfaction around how climate change is handled in their country,” Politico writes, “French voters are the most skeptical of their government’s climate efforts” among the European populations in the poll.

The poll also found little international consensus on whether or how quickly some of the biggest sources of carbon emissions should be banned. While 50% of Indian citizens agree that fossil-fueled vehicles should be phased out by 2030, Politico says, 41% of Americans think the combustion engine should never be banned at all.

‘This Is Sedition’: Ottawa Insurrection Has Roots in Pro-Pipeline, Pro-Fossil Convoy