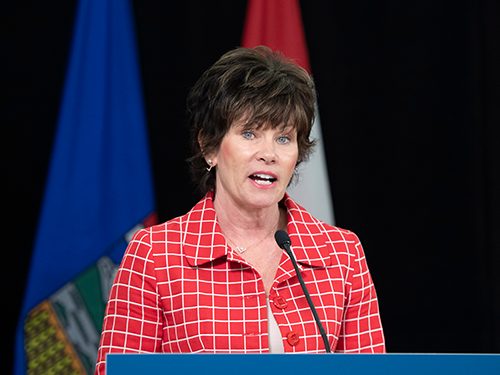 Alberta is seeking $1.3 billion in compensation from the U.S. government in the wake of President Joe Biden’s cancellation of the Keystone XL pipeline’s permit.

The provincial government says it has filed a notice of intent to launch a claim under legacy rules tied to the old North American Free Trade Agreement (NAFTA), The Canadian Press reports.

“After examining all available options, we have determined a legacy claim is the best avenue to recover the government’s investment in the Keystone XL project,” Alberta energy minister and former pipeline exec Sonya Savage said in a brief statement.

The proposed Keystone XL pipeline had been the subject of a decade-plus battle that pitted the energy industry against environmentalists, CP writes. Biden revoked the permit in the early hours of his presidency last year.

Calgary-based TC Energy, the company behind the proposed pipeline, filed a similar claim in July seeking US$15 billion, after formally cancelling the project and taking a $2.2-billion writedown.

The Alberta government had gambled on the project and was left on the hook for $1.3 billion when it was cancelled. And while oilpatch media covered the Alberta government’s announcement this week, Edmonton-based politics reporter David Climenhaga is questioning the odds that the NAFTA claim will succeed.

Savage’s assessment that this is Alberta’s best shot “is probably true, although that doesn’t mean it offers a very good chance of recovering the $1.3-billion bet— not an investment—that the Kenney government gave away in 2020 to TC Energy, the Calgary-based pipeline company previously known as TransCanada Pipelines,” he writes. “The gift was made in the expectation that Republican Donald Trump would be re-elected as president of the United States in November 2020 and that he would allow the controversial project to be completed.”

Why bother, Climenhaga asks? “Clearly it’s because the Kenney government looks exceedingly foolish for its bad bet, which immediately cost Alberta taxpayers $1.3 billion and may still leave them on the hook for up to another $6 billion in loan guarantees for TC Energy,” he writes.

“But while the claim is unlikely to succeed, it will not be resolved before the next Alberta general election, giving Mr. Kenney and the UCP time to leave the impression the government is aggressively pursuing the lost dough and intends to recover it,” he adds. “In reality, of course, they will be throwing good money after bad in an effort to fool Alberta voters.”

Climenhaga has more on the high cost and unlikely odds of Alberta’s NAFTA challenge.

The opening segment of this report was first published by The Canadian Press on February 9, 2022.