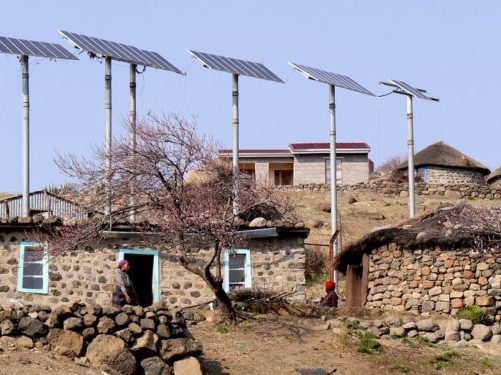 The fossil era is ending, zero-carbon electrification is imperative, and Africa stands rich in all that will be necessary to secure safer, more sustainable, and much wealthier lives for its peoples, says the Columbia Center on Sustainable Investment (CCSI) in a recent working paper.

“The world is moving to decarbonization by 2050, and Africa will be part of this global trend,” says CCSI in a paper titled “Roadmap to Zero-Carbon Electrification of Africa by 2050”[pdf], prepared for the African Natural Resources Centre of the African Development Bank.

“Many pending oil and gas projects in Africa will become unbankable in the coming years as decarbonization proceeds,” predicts CCSI. “The oil companies do not necessarily believe it today, but we are convinced that they will soon understand and act accordingly.”

Predicting a rise of interest in Africa’s “vast renewable energy potential, in the solar and hydropower sectors especially,” the center urges the continent “to frontload its investments in green electrification and digitalization.”

Africa “should borrow heavily, at very concessional rates, in order to build infrastructure and achieve other crucial sustainable development goals (SDGs) such as quality education for all children,” the report states. “Debt relief may also be helpful in increasing the fiscal space for green and digital investments.”

To drive that activity, the paper recommends that “the international community, guided by the African Union, should dramatically increase the capacity of the African Development Bank and other African banks.”

CCSI encourages African governments to promote urbanization as a strategy to cut the cost of electrification, as well as digital access and education, while warning that existing and future slums associated with rapid urbanization could hinder efficiency gains.

The energy part of the roadmap comprises three lanes, CCSI adds: the centralized energy infrastructure that will “be needed to meet the energy needs of urban populations, industrial users, and the transportation sector”; a network of decentralized, privately-run energy infrastructure like solar-based mini-grids and rooftop solar to power the continent’s vast rural areas; and a fossil fuel phaseout by 2050.

That overall strategy will depend on diversification policies to secure Africa’s position in zero-carbon energy markets, from green hydrogen to battery production and recycling. Policies will also be needed to ease Africa’s dependence on the collapsing fossil fuel industry, replace jobs that are lost, and ensure long-term government revenues.

Noting that Africa “has very high stakes in pushing for the global success of stopping human-induced climate change,” given climate damages that are “hugely disproportionate” to its contribution to global heating, CCSI urges institutions like the AFB and the African Union to “show a united front” for a rapid global transition to renewable energy.

“Africa has the right to receive significant international official financing for mitigating and adapting to climate change,” it adds.

The report urges Africa to take ownership at all points and in all sectors of the zero-carbon supply chain, citing “vast continental resources” in everything from renewable energy and strategic minerals, to the biodiversity upon which a stable climate depends, to the human skills that can be brought to bear in the transition.