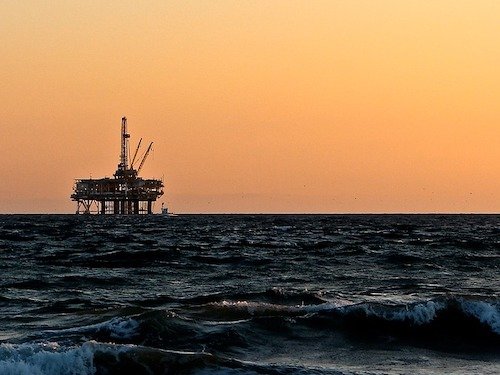 The analysis on behalf of the Carbon Tracker think tank “says that, if the goals of the Paris agreement are met, then many oil exploration projects will not deliver the returns their investors are expecting,” Climate Home News reports. Out of thousands of projects, geologist Mike Coffin focused in on five: the expansion of the Lower Fars heavy oil development in Kuwait; Shell’s and Exxon’s Bosi field in Nigeria; Petrobras’ Tupi and Exxon and Equinor’s Bacalhau projects in Brazil; and the Ichalkil Full project in Mexico.

Four of the five are offshore projects that “tend to be larger and therefore more expensive and time-consuming to build,” Climate Home writes. “They all require an oil price above US$50 a barrel to break even.”

While recent oil prices have ranged between $85 and $90 per barrel, successful fossil projects depend on stable economics over time. But in the last 7½ or so years, prices have swung wildly, even hitting the negative numbers with a low of -$37.63 per barrel in April, 2020.

“Companies may see high prices as a huge neon sign pointing towards investment in more supply,” said lead author Axel Dalman. “However, this could become a nightmare scenario if they go ahead with projects which deliver oil around the time that demand starts to decline. Shareholders could face catastrophic levels of value destruction as prices fall.”

Much of the criticism falls on the most expensive project on the list, Kuwait Petroleum’s $7.5-billion Lower Fars expansion.

“Projects like this gamble on a desperate world in which oil may trade for higher prices as hope of reining in climate change is lost,” Chatham House Gulf analyst Glada Lahn told Climate Home News. “No sensible investor should be banking on a future for heavy oil.”

She added that the amount of energy and water needed to extract and liquefy the oil at Lower Fars would make the plan “horrendous” from an environmental as well as an economic perspective.

Shell and Exxon, meanwhile, will need steady prices in the high $50s per barrel to make money on their $6.7-billion Bosi offshore oilfield, which they hope will start pumping oil in 2029, Climate Home writes. But Chukwumerije Okereke, a Nigerian professor of environment and development at Reading University, said the country faces “grave” risk—it’s vulnerable to climate change, but relies on oil and gas for 86% of its foreign exchange revenue, and is struggling with a 40% poverty rate.

“Oil exploration is a major source of climate pollution in Nigeria but also, at least for now, the lifeline of Nigeria’s economy,” he said. “Nigeria is between the devil and the deep blue sea with regards to stranded assets in particular and climate change in general.”

The Carbon Tracker analysis arrived with UK households and businesses facing drastic increases in energy costs, while BP and Shell took home £900 per second in profits in the last three months of 2021. The Mirror had Shell alone drawing more than £32,000 per hour, about as much as the average National Health Service nurse earns in a year.

The UK government was already facing calls for a windfall profit tax on fossils operating lucrative oil and gas platforms in the North Sea.