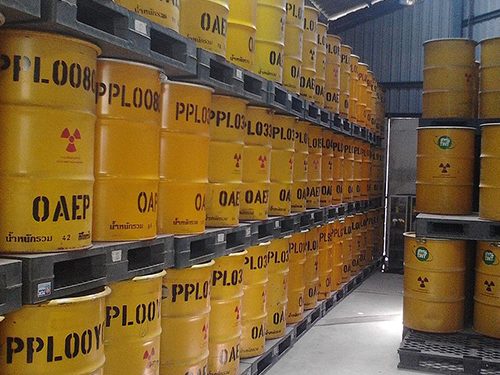 Canada’s nuclear industry is proposing to transport highly radioactive waste by road and rail through some of Ontario’s most densely populated communities, promising collision-proof containers and round-the-clock security detail, but watchdog groups are demanding more details.

Under the proposed plan from the Nuclear Waste Management Organization (NWMO), 30,000 shipments of spent nuclear fuel rods would be transported from reactor sites and interim storage facilities to one of two sites in Ontario that are being surveyed as permanent repositories, reports CBC News.

Either South Bruce or Ignace will then find itself receiving the waste round the clock from elsewhere in Ontario, as well as from Quebec, Manitoba, and New Brunswick, roughly twice a day for 40 years starting in 2040.

“We’re confident we can safely transport used nuclear fuel,” said Caitlin Burley, the NWMO’s manager of transportation engagement. She said the waste containers will conform to international standards that require them to be able to withstand a range of dire mishaps.

CBC notes that these include being “rammed with a speeding locomotive or even set ablaze using propane and jet fuel.” (Prior to being dropped and immersed in water, according to Burley.)

Alert to the possibility that a shipment could be hijacked, NWMO’s plan also includes a security detail and round-the-clock monitoring by satellite.

Critics of the proposed plan would like to see a lot more specifics. Bill Knoll, vice-president of the citizens’ group Protecting Our Waterways — No Nuclear Waste, told CBC in an email that the plan is “vague on details”, adding up to “more of a plan for a plan” than a plan itself.

“We’re really interested in what people have to say so we can incorporate it into our planning,” she added.