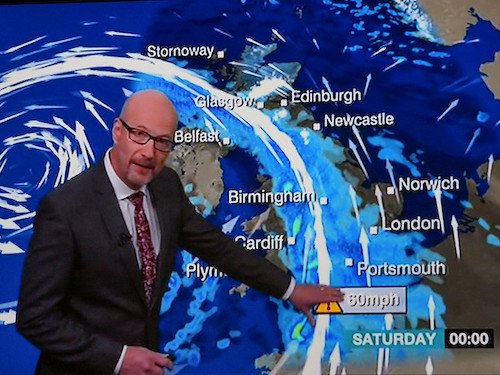 As extreme weather events dominate the daily headlines, TV weather reporters are trading in their traditional role as comic relief and becoming climate educators—though their message remains tailored to their target demographic.

“For decades, the men and women taking their best educated guess about the weather provided a respite from grim news reports, often playing a comic foil to the anchors,” writes the New York Times.

But not today. People like Ginger Zee, chief meteorologist for ABC, now “see themselves as tracking maybe the most serious story of our time,” and “have often gone out of their way to remind viewers explicitly that human-created climate change is a real and disruptive force that has put lives and the environment at risk.”

Even Fox Weather, a 24-hour weather streaming channel on the air since October, has committed to talking about more than just what’s happening outside the window.

“Our job is to help people live better and to give them information and tools they can use in the here and the now,” Fox meteorologist Amy Freeze told the Times. “So we are going to cover climate change.”

But it’s still a tricky business to talk about climate change on air in America, notes the Times, with several TV weather people mentioning the need to avoid being too didactic, and others confirming that climate change remains a politically divisive issue.

Times cites a Medium article written last year by James Spann, a meteorologist at ABC’s affiliate in Birmingham, Alabama. “Say anything about climate and you lose half your audience,” he wrote.

Others say feedback on the increase in climate coverage has been overwhelmingly positive, as many Americans grow more anxious to fully understand what’s going on outside.

“I don’t look at my position as a bully pulpit,” Al Roker, the weather and feature anchor at NBC’s Today Show, told the Times. “It’s informational. You can open more eyes by just presenting facts.”

While “our management and producers don’t underestimate our audience,” Roker added, “I think politicians may.”