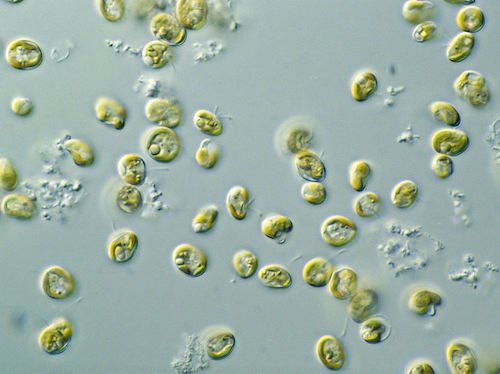 Lured by a potential US$320 billion market and the promise of reduced emissions, oil refiner Eneos Holdings and Honda Motors are joining forces with more than 35 Japanese companies and institutions to discover how to turn microalgae into fossil-free versions of aviation fuel, naphtha, resins, and other products.

Alongside Eneos and Honda, both of which are hoping to benefit from microalgae-based fuels (as well as resins, in the case of the car company) is Mitsui Chemicals Inc, one of a half dozen chemical companies that have joined Matsuri in the hope of using microalgae-based naphtha in their production of solvents and plastics.

“By replacing chemical-based naphtha with a bio-based one, we can reduce carbon dioxide emissions and also convert many household products to biomass-derived products,” said Mitsui Vice President Hideki Matsuo.

Work has now begun on a five-hectare trial farm in Sarawak (Malaysian Borneo), but something far larger will be needed to make the venture commercially viable.

A critical step in creating such a farm will be securing the necessary land. The builder of the trial farm, Singapore-based Chitose Bio Evolution Pte. Ltd., is negotiating with the Sarawak state government to expand the prototype facility to 2,000 hectares, while working to raise $1.8 billion for the project. The company is also considering other locations in Southeast Asia and the Middle East, Bloomberg says. (There’s no mention in the news story of the land title issue that could arise or how the company plans to address them.)

Another critical step will be to drive the price of microalgae below the sweet spot of 100 yen per kilogram. Motonari Shibakami, senior researcher at Japan’s National Institute of Advanced Industrial Science and Technology, said that’s the price at which “many more companies will consider replacing their petroleum-based products with microalgae-based alternatives.”

Encouraging a global appetite for microalgae is also part of a business plan that aims to take food crops like corn and soybeans out of the biofuel business.

That’s because food is a key market for microalgae if it is to be produced at a large enough scale to drive down its price, according to Bloomberg.